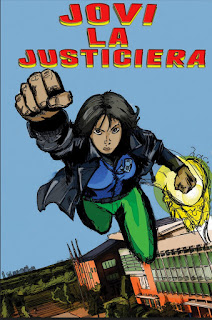 An important message from UNT Dallas College of Education Dean John Gasko, whose college is embarked on their grow-your-own superhighway for future bilingual educators into the teaching profession.

Here is an earlier story from my blog on their wonderful efforts in Dallas, Texas titled, "How Texas can end its bilingual teacher shortage."  Read the story to learn  about how Dallas is one of our NLERAP sites that's brilliantly showing how we can go about meeting the demand for bilingual education teachers in the Dallas-Ft. Worth metroplex.

So proud of the work that our colleagues are doing there to grown their own teachers and meet a serious demand for bilingual education teachers.

We need Jovi La Justiciera here in Austin, too!

I am excited to share with you the final first edition of our teacher superhero comic, Jovi La Justiciera, which will officially launch this July at the Texas Latino Comic Convention. Jovanna (Jovi for short) is a Dreamer from Honduras who is a product of Dallas ISD schools, who attended UNT Dallas to become a teacher, and through our bilingual grow-your-own superhighway has returned back to South Dallas as a teacher of record by day with an alter ego, “Justice”.

Jovi was inspired by research that reveals that Latino/as are now the largest consumers of anime, comics, and manga worldwide and I thought we would reach and stir the callings of future UNT Dallas bilingual teacher candidates by being provoked through the comic imagination. Jovi’s story is modeled on the stories we so often hear among many of the high school and community college students we interact with as well as our own students.

Jovi’s comic style was created by Hector Rodriguez, who is a bilingual teacher in McKinney and owner of Rio Bravo Comics. She is comparable to Ms. Marvel, who is a Pakistani immigrant and, outside of Wonder Woman, is one of the few female superheroes in the Marvel Universe.

We will have all editions as they come compiled in digital form and we will be printing out limited copies in the traditional comic form. Eventually we will have it translated into Spanish.

Posted by Angela Valenzuela at 11:02 AM