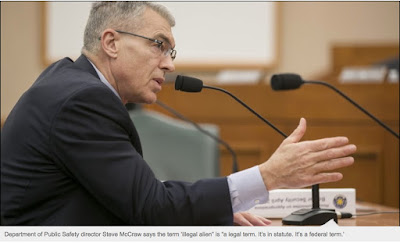 An exchange between a legislator and the leader of Texas’ state law enforcement agency made us wonder whether federal law uses “illegal alien”to describe any individual living in the U.S. without legal authorization.
It doesn’t, we learned, though the term does make a few appearances.
Many news organizations avoid the term “illegal alien.” In 2013, the Associated Press dropped “illegal immigrant” from its stylebook. An AP spokesman said then that “illegal” should be used to describe actions, not people, and the AP counseled journalists against using “illegal alien” except in direct quotations.
Let’s unpack what touched off this fact-check, then turn to “illegal alien” in American law.
At an April 18 Texas House hearing, state Rep. Mary González, D-San Elizario, elicited agreement from Steve McCraw, director of the Texas Department of Public Safety, that the words that “we choose to use” are powerful.
González told McCraw she “had concerns about the language that you use and the agency is using in talking about undocumented immigrants. If we’re talking about children, for example, unaccompanied minors, then using words like ‘illegal aliens,’ I have had a concern about that, right?” she said. “My question is, is the agency standard in typically referring to undocumented immigrants as IA’s?”
McCraw answered: “I always use ‘illegal aliens’ and I have when I was assigned to the Department of Justice, when I worked at the FBI, when I was assigned as the director of the foreign terrorism task force because it’s a term, it’s a legal term. It’s in statute. It’s a federal term, and it’s not intended to degrade anybody in any way, shape or form.” McCraw spent 21 years with the FBI before becoming the DPS director.
González replied that people “in my community” would find it “very concerning to use this language.” McCraw answered that he’d consult DPS staff and “re-evaluate the use of words that their director has been using to describe, I’ve been consistent about that. And if it’s insulting, if it truly is insulting, I don’t intend to insult anybody.”
We later asked the DPS to elaborate on McCraw’s claim that “illegal aliens” appears in statute. We didn’t hear back.
Given McCraw’s singling out of federal statutes, we searched the portion of federal law titled “Aliens and Nationality,” and saw that the chapter titled “Immigration and Nationality” defines the word “alien” alone as “any person not a citizen or national of the United States.”
Arwen FitzGerald of U.S. Citizenship and Immigration Services pointed us to four uses of “illegal alien,” two in federal law and the others in a congressional act.
Section 1252(c) of the “Aliens and Nationality” laws is titled: “Authorizing State and local law enforcement officials to arrest and detain certain illegal aliens.” The section authorizes state and local law enforcement officials “to arrest and detain an individual who — (1) is an alien illegally present in the United States; and (2) has previously been convicted of a felony in the United States and deported or left the United States after such conviction.”
Section 1365, titled “Reimbursement of States for costs of incarcerating illegal aliens and certain Cuban nationals,” applies to any alien convicted of a felony who’s in the country unlawfully and whose most recent entry “was without inspection, or whose most recent admission to the United States was as a nonimmigrant and whose period of authorized stay as a nonimmigrant expired, or whose unlawful status was known to the government.”
FitzGerald also pointed out that a section of the Illegal Immigration Reform and Immigrant Responsibility Act of 1996 authorized the hiring of 25 new federal lawyers to “prosecute persons who bring into the United States or harbor illegal aliens or violate other criminal statutes involving illegal aliens.” Also noted: A section of the act requiring an annual report detailing “the number of illegal aliens” sentenced or jailed for felonies in state and federal prisons.
That act, we saw, relies on the established definition of “alien” spotted earlier. It doesn’t explicitly define “illegal alien.”
Academic experts on immigration law told us such scattered mentions of “illegal alien” in legislation and law don’t mean much.
Denise Gilman, who directs the University of Texas immigration law clinic, pointed out that all but one of the term’s mentions in the 1996 act appear in section titles, not in intended statutory language. “The title is a political marker in the legislation but is not the law itself,” Gilman wrote. “For example, the section titled ‘Pilot programs on limiting issuance of driver’s licenses to illegal aliens,’ goes on to use legal terms in the actual text,” Gilman wrote, which refers only to “aliens who are not lawfully present” in the United States.
Notably, Rick Su of the University of Buffalo School of Law told us, the “illegal alien” term doesn’t appear in the vast Immigration and Nationality Act, the nation’s main immigration law.
Finally, we searched Texas laws and the state constitution on the Legislature’s website and didn’t find “illegal alien” or “illegal aliens” though we saw multiple provisions specifying how laws apply to aliens.
Our ruling:
McCraw told legislators the term “illegal alien” is “a legal term. It’s in statute. It’s a federal term.”
The term appears — yet scarcely — in federal law. Best we can tell, no law defines the term as referring to all individuals living in the U.S. without legal authorization. Where the term does appear, it’s undefined or part of an introductory title or limited to apply to certain individuals convicted of felonies.
On balance, we rate McCraw’s claim Half True.