Trump’s NASA Chief: 'I Fully Believe and Know the Climate Is Changing'

Here is what NASA Chief Bridenstine, the new head of NASA is saying:

“I believe carbon dioxide is a greenhouse gas. I believe that humans are contributing to carbon dioxide in the atmosphere.”
“To what extent?” Schatz asked.
“That is a question I do not have an answer to, but I do know that humans have absolutely contributed to global warming,” Bridenstine replied.

"The latest budget deal didn’t specifically mention nasa’s Carbon Monitoring System, a $10-million program to track greenhouse-gas emissions around the world. The Trump administration took that as an opportunity to terminate the program for good."
If not Trump, then surely  most in his administration must know these things...that humans contribute to global warming.  Miami loses an inch of its shoreline every year.  Louisiana loses football fields of its land base every single day.  Many places throughout the world are currently uninhabitable due to climate change. The problem is that it doesn't serve Trump's interest to be straight up with Americans and to admit such things.

We need to get Trump and his minions out of office. Impeach, indict, bring criminal charges against him—whatever it takes.  And let's elect a Congress that is environmentally aware and politically aggressive on such things.  Not only does our species survival as homo sapiens depend on this, but we should all wish a better world with clean energy for our children, grand children, and the unborn generations. 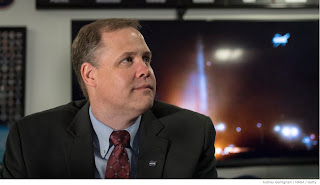 Trump’s NASA Chief: 'I Fully Believe and Know the Climate Is Changing'

“I also know that we human beings are contributing to it in a major way,” Jim Bridenstine said, taking an unusual stance for his administration.

Posted by Angela Valenzuela at 10:20 PM