Interestingly, despite anti-immigrant politics and policies and toxic racism that seems to be a daily affair these days, the amazing Ethnic Studies grassroots movement discussed by Jaweek Kaleem below is on how this call for inclusion is happening across the country.

The press on what's happening in Texas can be confusing but the gist of it is that while we here in Texas won the battle associated with the larger Ethnic Studies battle—such that we now have Latino Studies, African American Studies, Asian American and Pacific Islander Studies, and Native American Studies—we still did not get the "Mexican American Studies" course for which we, as a community of educators, elders, teachers, students, university faculty, and civil rights community, advocated.

And now we have been put in the position of still having to struggle with the Texas State Board of Education in order to challenge the name that THEY gave US, namely, "Ethnic Studies: An Overview of Americans of Mexican Descent."  Many of us have expressed just how paternalistic and repulsive this name is—with echoes that go back to McCarthyism and subtractive cultural assimilation to which my parents were subjected in the public schools throughout the 1940s, 50s, and early-to-mid-60s.

The sought-after curricular and pedagogical approach centers children in their own experiences and thusly, their own possibilities in order to help them live more meaningful and fulfilling lives.  This not only helps our children to feel a part of the grand American narrative, but as mentioned in the article below, encourages prejudice reduction and openness to other cultures for all children exposed to this curriculum.

Just like every single individual deserves to get called their name, we, too, as a Mexican American Studies constituency, similarly warrant and demand as much. 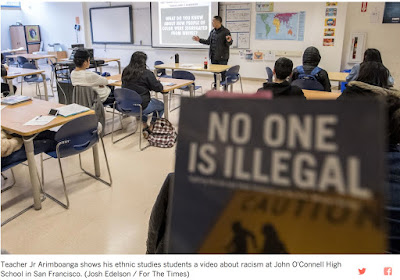 As public debates swirl around "Dreamers," President Trump's border wall and Black Lives Matter, the study of race and ethnicity is booming in public schools.
Nationwide, states and school systems are refining, expanding or adopting courses that explore history, literature and politics through the eyes of people who aren't white. The programs, which until recently were banned in Arizona and derided as anti-American, are thriving in unexpected places. Some districts are making ethnic studies compulsory — for whites as well as minorities.

"In our current political context, especially with the president, there has been a huge gain in the critical study of race and ethnicity, and the desire for students to see themselves reflected in what they are learning," said Julia Jordan-Zachery, a professor at Providence College in Rhode Island and president of the National Assn. for Ethnic Studies. "The interest predates Trump, but it's only growing now. It's a way of flipping the script on what teaching is traditionally supposed to be."
It's a profound shift from just seven years ago, when the closing of a Mexican American studies program in Tucson caused national uproar.

Last May, Indiana Gov. Eric Holcomb — who took over the job from Vice President Mike Pence — signed a law requiring every high school to offer an ethnic or racial studies elective each year. The move came after years of failed attempts to get similar laws on the books. What changed? Republicans teamed up with Democrats and called for classes to be electives instead of requirements. Students need the "opportunity to take a class that relates to their experiences and heritage," bill co-sponsor state Rep. Robert Behning, a Republican, said at the time.


Indiana leaders of the National Assn. for the Advancement of Colored People launched an aggressive lobbying effort, spurred in part by police shootings of unarmed black Americans.

In June, Oregon Gov. Kate Brown signed a bill requiring ethnic studies for all public school students between kindergarten and 12th grade. As in Indiana, racial minority groups — emboldened in part by a number of hate crimes in one of the country's whitest states — were behind the change.

The law compels Oregon educators to look at where they fail "to recognize the histories, contributions and perspectives of ethnic minorities and social minorities." It includes women, disabled people, refugees, immigrants and LGBTQ people among "social minorities."

Also last June, the Seattle school board said it would weave ethnic studies into its schools' curriculums after coming underNAACP pressure. 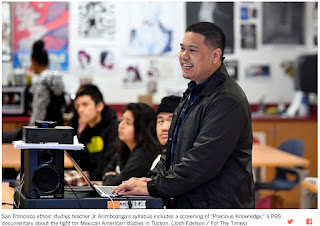 While previous campaigns to establish ethnic studies programs around the U.S. targeted minority groups, the Seattle NAACP made a different case, asserting on its website, "Ethnic studies courses benefit white students, who disproportionately have the privilege to be unaware of the realities of racism." The argument was similar in the mostly black and Latino city of Bridgeport, Conn., where last October school administrators decided to require students to take a half-year class on African American studies, Caribbean/Latin American studies or a course on race to graduate.
"Even in places where it hasn't fully blossomed, there are steps being taken to incorporate ethnic studies," Jordan-Zachery said. That includes Kansas and Texas, where legislators are pushing measures that would institute Mexican American studies classes and those on other ethnic groups.
"For much of the history of education in the U.S., we have been deleted and erased in textbooks," said Georgina C. Perez, a Latina Democrat on the Texas state Board of Education. Through ethnic studies, she said, "we're reclaiming our history."
States and cities are following California, where education officials are standardizing what's taught in ethnic studies classes after highly touted programs in San Francisco, San Diego and Los Angeles.
Ethnic studies grew out of the civil rights and anti-colonial movements of the 1960s. San Francisco State University was a pioneer, with its College of Ethnic Studies that launched in 1968. UC Berkeley opened an ethnic studies department a year later. In 1994, Berkeley High School became one of the first public high schools in the nation to offer ethnic studies.
A key for many programs is their reading lists. At Barack and Michelle Obama Elementary School in St. Paul, Minn., kids in an African American studies class read "Desmond and the Very Mean Word," a story based of the childhood of future Anglican Archbishop Desmond Tutu in apartheid South Africa.
At John O'Connell High School in San Francisco, ninth-grade ethnic studies students look at how news and entertainment media portray minorities, and they read from the autobiography of black nationalist Assata Shakur and the Eddie Huang memoir on his experience as an Asian American,"Fresh off the Boat."
In Sarah Rodriguez's ethnic studies class at Santa Monica High School, a recent lesson revolved around students discussing activism against gentrification in Boyle Heights, where art galleries and coffee shops have attracted white and more well-off newcomers in the traditionally Mexican American, working-class neighborhood.
Activists celebrated last year after an arts nonprofit called PSSST shut down amid criticism that it was helping to displace locals.
Rodriguez told the 17 students — a mix of sophomores, juniors and seniors — to discuss a Boyle Heights blog that suggested gentrification counted as a form of racist state violence.
She asked students if they agreed that the transformation of a neighborhood, often fueled by government policies that cater to business interests, could be described that way. Some said yes. Some said the answer wasn't so simple, especially after they watched a documentary about a Latina artist who praised the arrival of galleries and said the neighborhood was now safer than when she grew up there.
"The class really challenges you to think about your identity yourself," said Diana Hernandez, a Mexican American sophomore enrolled. "It helps us make more sense of what we're learning throughout the school day."
Nationally, supporters of ethnic studies say they lead to better grades and graduation rates. They frequently cite a 2016 Stanford University study assessing the San Francisco Unified School District's ethnic studies program when it was a pilot between 2010 and 2014. The study found that students who took ethnic studies courses, including many who came from lower-income families, performed better overall than other students. 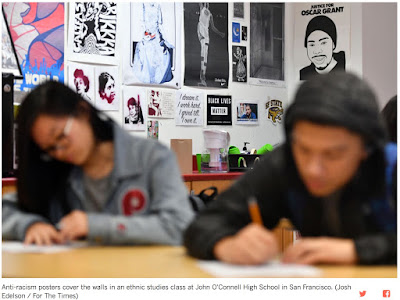 Ethnic studies students' attendance rates were 21 percentage points higher, they earned more points toward graduation, and their grade-point averages rose by 1.4 points. Students made the biggest gains in science and math, and boys and Latino students made the greatest improvements.
Jr Arimboanga, an ethnic studies teacher at John O'Connell High, one of the schools in the San Francisco study, said confidence and study skills have increased among students who have taken the classes.
"When you look at traditional world history that many of our students take, the textbook is the dominant narrative," Arimboanga said. "It focuses on a Eurocentric experience. People of color are mentioned in negative or simplified ways. The African American experience only starts with slavery and forgets the previous rich history in Africa. Latinos and Mexican American students often have a paragraph around the Mexican-American War, but don't read about the native experience of Latinx peoples before colonialism."
His syllabus includes a screening of "Precious Knowledge," a PBS documentary about the fight for Mexican American studies in Tucson. The Arizona school district shut down the program in 2012 after state officials threatened to withhold more than $14 million for violating a newly passed law banning courses tailored for a particular ethnic group or that were deemed to fuel anti-American sentiment.
Then-Arizona Supt. of Education John Huppenthal said a Tucson class he observed — where a Che Guevara image hung on a wall and he said a lecture described Benjamin Franklin as racist — seemed anti-white. Kids "understood the framework that was being laid out — that Hispanics are the oppressed and Caucasians are the oppressors. That's very troubling," he told the Los Angeles Times at the time.
In response, the district introduced a program for "culturally relevant" teaching that didn't run afoul of the law but still allowed classes on government and history with Mexican American and African American perspectives.
In August, a federal judge in Phoenix declared the ban on ethnic studies unconstitutional, saying it violated Latino students' 1st Amendment "right to receive information and ideas." In December the same judge banned Arizona from enforcing the law, and cited Huppenthal's crusade against the courses.
Ethnic studies supporters hailed the decision, hoping it would spur the growth of such programs across the U.S.
But in Arizona, the subject remains touchy. State education officials said they want to preserve elements of the ban. Trustees of the Tucson Unified School District, although given the green light by the federal judge, held off on resuming Mexican American studies courses last month.
"While it's growing in California and elsewhere, it's still a controversial issue here," said school board member Kristel Foster, who sponsored the proposal to once again allow Mexican American studies. "Every election here people still ask about Mexican American studies. The ban is gone, and things have moved in many places nationally, but it's still having an effect here."​
jaweed.kaleem@latimes.com
Jaweed Kaleem is The Times' national race and justice correspondent. Follow him on Twitter, Facebook and Instagram.
Posted by Angela Valenzuela at 11:00 PM