Texas Becomes the Second State in the US to Implement Mexican American Studies by Christine Bolaños, REMEZCLA

Friends,
Do pay attention to press conferences on the name change happening statewide next Friday.
This piece by Christine Bolaños provides a good overview of the issue.
Thanks to Sandra Telles Rojas for sharing!
Angela Valenzuela
#NoToAmericansOfMexicanDescent 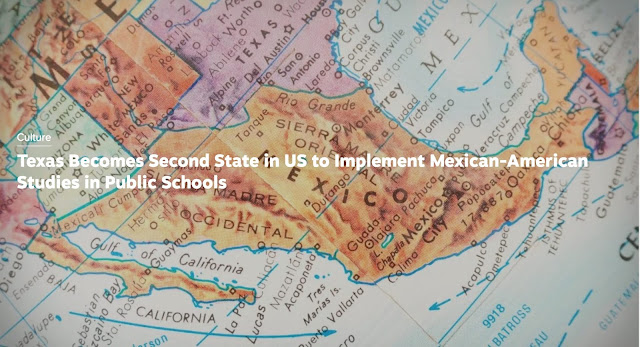 By Christine Bolaños | 1 month ago
Texas just became the second state to implement a Mexican-American studies course, following in the footsteps of Arizona, which created a similar in the 1990s (though it
was banned for a few years). Today, the Texas State Board of Education gave final
approval for a standard high school elective course for Mexican-American studies. Advocates, who have pushed for an official course since 2013, described the motion
as a “historic decision” that could set a precedent for other ethnic courses in the future.
The state is modeling the course after an innovative class taught at the Houston school
district called Mexican-American studies (MAS). The course meets Texas Essential Knowledge and Skills standards.
Today, supporters celebrate the approval of the course, but they vowed to continue
fighting. On Wednesday, Board member David Bradley – a Republican representing
Southeast Texas – proposed changing the name to “Ethnic Studies: An Overview of Americans of Mexican Descent.” He argued that “hyphenated Americanism” could lead
to divisiveness.
Despite pleas from all Democratic Latinos sitting on the board to leave “Mexican-
American” in the title, a majority of the board approved the name change on
Wednesday. On Friday, board member Ruben Cortez of Brownsville, urged the board
to leave the name as is before giving the course final approval. “A lot of people are just deeply offended that the board has gone in this direction,” Cortez said. Board member
Marty Rowley said the board would consider public reactions at upcoming meetings.
“It’s not just the title of a course, it’s the title of an identity,” said board member Erika
Beltran of Fort Worth. “Our responsibility as members of this body is to acknowledge
people’s differences and honor that and respect that, and that includes naming a course
like this, it’s original name.”
Ultimately, a majority of the board voted to go with the course’s name change. After
the vote, visibly emotional board member Marisa B. Perez-Diaz of Converse, shared a
Mexican proverb followed with a passionate disapproval of the board’s decision.
“Today what happened was my colleagues around this boardroom identified me. My
identity is my own and I am to define myself. That did not happen today,” she said,
adding that her tears were a sign of anger not of weakness. “We identified thousands of students across Texas today and took that power from them.”
Despite the setback, advocates view the decision as a historic win. Today’s vote is in
direct contrast to 2014 when the board rejected a MAS course. It also hasn’t adopted a
MAS textbook but has considered and rejected two different textbooks in the past, after
one was considered racist, and the other not comprehensive enough.
Juan Tejeda of the Somos Mas campaign said plans are underway to contest the course
name change during the public comments portion of the June SBOE meeting. The fight
will also continue through the press and social media, he said. “The name change
diminishes the field of study, diminishes us as a people and our history and
contributions to the state, and it’s not (fully) accurate,” Tejeda said.
Angela Valenzuela, who serves as director for the Texas Center for Education Policy
at  the University of Texas at Austin’s College of Education, called the decision
“paternalistic” and said it robbed Mexican-Americans of any true sense of
accomplishment.
Marcial Guajardo, an Austin area resident who works in the communications field,
wrote a letter to the board defending the MAS course title. Part of his argument focused
on how reputable sources, such as the AP Stylebook and several dictionaries, recognize
the term Mexican-American. “Bradley,” said the self-described history buff, “either by ignorance or on purpose, is trying to strip us of our ethnicity by eliminating it from the
books.”

Posted by Angela Valenzuela at 1:19 PM