What an extraordinary, much-merited, and very appropriate tribute to UT History Professor Dr. Alberto Martinez by University of Texas Classics professor Tom Palaima.  To wit, check out his latest tour de force against the "Eyes of Texas Song": "100 Problems in ‘The Eyes of Texas’: A long list of reasons why UT Austin should change its official school song."

This is the same Dr. Martinez who is the first author of the Hispanic Equity Report that now finds positive and hopeful expression in Senate Bill 1709, a higher education equity bill.

Do check out the 100 reasons, including a rejection of the song by some student athletes. Also check out what he finds as a "stalker vibe" within the song that makes it "creepy for 21st century women." Not a minor point at all, by the way.

Like Dr. Palaima, I, too, am in admiration of his formidable, truly pathbreaking, social justice work and leadership at the University of Texas at Austin. 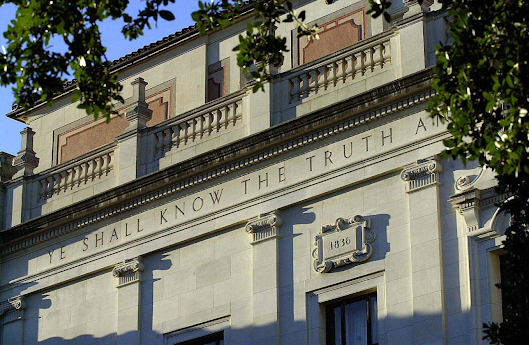 In January, 1974, Ronnie Dugger, editor of The Daily Texan (1950–51), and founding editor (1954–61) of The Texas Observer, which he conceived as an instrument to investigate things done in society at large and make generally known the truth about them, published Our Invaded Universities: Form, Reform and New Starts; a Nonfiction Play for Five Stages.

Ronnie reviewed in accurate detail how the Board of Regents and other power figures in Texas society acted time and again against the academic principles and humanistic values that should be safeguarded and promoted within our university in order to help students become citizens with moral consciences who will, while at UT Austin and then throughout their lives, act for the good of society and who will recognize and know the truth and uphold it in order to set themselves and others free.

Why do we have Homer Rainey Hall on our campus? Because in 1941 when Rainey was told to fire four tenured full professors for explaining the ins and outs of the Depression-era New Deal program to their fellow Texans, he refused to do so.

The regents also viewed the novels of John dos Passos as advancing indecent values and in 1944 moved to fire an English professor for putting the novel Big Money on the reading list for UT students. https://www.nytimes.com/1985/12/20/us/homer-price-rainey-89-dies-educator-in-44-texas-dispute.html

Rainey, a deeply religious and conservative man, had two big flaws from the Regents’ point of view:

1. Rainey was an intellectual who believed in academic freedom and the open exchange of ideas; and

2. Rainey practiced the motto that William Battle and then the regents approved to be engraved upon UT’s Tower Building in 1935: “Ye shall know the truth and the truth shall set you free.”

Battle, who also knew the Latin version from the Gospel of John: “Cognoscetis veritatem et veritas liberabit vos,” in 1935 explained what this phrase meant and how it was to be put into practice:

“Truth and freedom are so essentially the foundation of education, character, and progress that the injunction to seek truth as a means to freedom is as splendid a call to youth as we can make. Its form is perfect, its source is not a drawback, and it has the weight of nearly two thousand years acceptation.”

The regents who approved the motto did not last long. They were replaced by other regents who went after learned professors who specialized in understanding and explaining the economic basis of what the regents considered the ‘communist’ ideas of the president of the United States known as the New Deal.

Few are the individuals on campus who have the intellectual skills, moral courage, and dedication to the truth envisioned by Battle and championed by Rainey.

Fewer still those who, like Dugger, devote their entire lives to seeking the truth and promulgating it for the good of society and not for any particular group in society.

Dugger told me, the last time that I spoke with him a few years back, that if you pursue the truth, you will end up a lonely person.

It seems to me that he was underestimating the good that he has done throughout his lifetime and the reverence in which he is now held.

Likewise, I think that Alberto Martinez in exposing 100 glaring historical truths about the racism underlying the UT ‘anthem’ “The Eyes of Texas Are Upon You”

has stepped up alongside Battle, Rainey and Dugger by giving voice to many, many, many individuals over the decades who felt morally compromised and who could not act openly at the risk of losing the lifelong rewards that a university degree offers to those who do not come from privileged backgrounds and who are not supported by individuals who hold power and have influence in our various kinds of government, in our public institutions and in our private businesses.

I believe that Martinez knows the truth. In well-chosen words and in a truly disturbing selection of photographs of black-face racism on the Forty Acres stretching out over six decades, well into the 1960’s, Martinez is trying to set us all free.

I am proud to have called him for many years now a friend and colleague.

Posted by Angela Valenzuela at 9:26 PM