House Bill 3979 was debated into the wee hours of the morning. I caught the whole Senate debate. Senator Hughes was disingenuous in saying that the bill is needed so as to make sure that no students are taught "that one race or gender is not superior to another." Why, when we know that doing so is so morally and ethically objectionable?

The answer is that it's not happening, my friends. Nor did they defend their position well at all.

As per my previous post, Sen. Bryan Hughes had no answer to statements made that HB 3979 represents an agenda pursued by the former Trump administration.

As Senators Carol Alvarado, John Whitmire, Royce West, José Menéndez,  and others said last night, this is unnecessary legislation because it distrusts and disrespects teachers on the indefensible grounds that this lie that teachers are teaching this way is actually happening.

Whitmire, in particular, asked Senator Hughes directly  about the specific sources for this concern, including which teachers, parents, and academics were behind this. In this same vein, Senator Alvarado, pointed to a petition against HB 3979 with approximately a hundred signatures on it from historians to which he said he was unaware. All Hughes could offer is that it comes from a text that surfaced in Hyde Park from nebulous sources that Senator Hughes refused to divulge.

This all sounds super fishy and lends credence to the rumor circling about at the capitol that is is a self-published text designed to sabotage the teaching of race relations and critical perspectives in our social studies curriculum.

We know that this is a Trumpian, knee-jerk response to the racial justice movement that took place this year in the wake of the George Floyd and Breonna Taylor killings by police. I'll state again what I said recently to a Houston Chronicle reporter: “This is part of a larger agenda to disenfranchise our communities, because we know that people who are critical and involved, that they vote."

One person I came across cogently said, this is an "avoidance curriculum," in that it seeks to muzzle discourse on white supremacy, patriarchy, and systemic oppression as if these reasons for inequality in our country simply expired.  Senator Royce West did a really good job on drilling down on this point last night on how the under-representation of African American Senators in Texas (there are only two) are evidence of systemic racism and oppression.

Listen for yourself to last night's entire Texas Senate floor debate at this link that begins at 1:33:21 on the meter.

Longer term, we need to vote this no-nothing, right-wing legislature, out of power—even as they reinscribe white supremacy through legislation like this to preserve their incumbencies. After all, you cannot conquer a people with a history. And they know that.

The bill aims to ban critical race theory in public and open-enrollment charter schools. Supporters say it merely ensures students aren't taught that one race or gender is superior to another. Critics say it limits how race in America is taught. 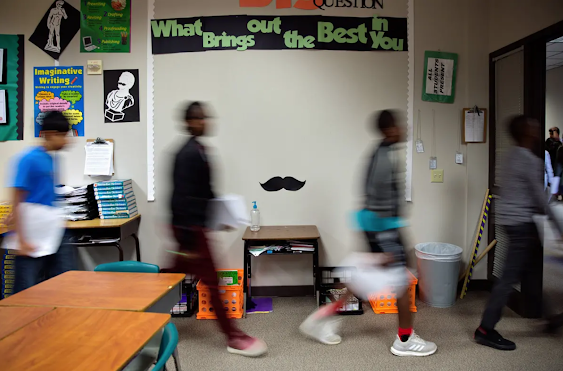 Students leave the classroom to work in the computer lab at Mata Intermediate School. Credit:

After hours of passionate debate about how Texas teachers can instruct school children about America’s history of subjugating people of color, the state Senate early Saturday morning advanced a new version of a controversial bill aimed at banning critical race theory in public and open-enrollment charter schools.

Sen. Bryan Hughes, R-Mineola, introduced a reworked version of House Bill 3979 that also requires the State Board of Education to develop new state standards for civics education with a corresponding teacher training program to start in the 2022-23 school year. The Senate approved the bill in an 18-13 vote over opposition from educators, school advocacy groups and senators of color who worry it limits necessary conversation about the roles race and racism play in U.S. history.

The bill now heads back to the Texas House, which can either accept the Senate’s changes or call for a conference committee made up of members from both chambers to iron out their differences.

The Senate-approved version revives specific essential curriculum standards that students are required to understand, including the Declaration of Independence and the Federalist Papers. But it stripped more than two dozen requirements to study the writings or stories of multiple women and people of color that were also previously approved by the House, despite attempts by Democratic senators to reinstate some of those materials in the bill.

The Senate did vote to include the Federal Civil Rights Act of 1964, the 13th 14th and 19th amendments to the U.S. Constitution and the complexity of the relationship between Texas and Mexico to the list of required instruction.

Yet the most controversial aspects of the bill remain, including that teachers must explore current events from multiple positions without giving “deference to any one perspective.” It also bars students from getting course credit for civic engagement efforts, including lobbying for legislation or other types of political activism.

Educators, historians and school advocacy groups who fiercely oppose the bill remained unswayed by arguments that the bill is merely meant to ensure students are taught that one race or gender is not superior to another.

“Giving equal weight to all sides concerning current events would mean that the El Paso terrorist ideology would have to be given equal weight to the idea that racism is wrong,” said Trinidad Gonzales, a history professor and assistant chair of the dual enrollment program at South Texas College. “That is the problem, white supremacy would be ignored or given deference if addressed. That is the problem with the bill.”

Hughes denied that the bill would require teachers give moral equivalency to perpetrators of horrific violence.

Sen. Brandon Creighton, R-Conroe, who sponsored the Senate version of the bill, said in a statement to the Tribune that Texas schools should emphasize “traditional history, focusing on the ideas that make our country great and the story of how our country has risen to meet those ideals.”

But Sen. Royce West, D-Dallas, raised concerns on the Senate floor that the historical documents required in the bill only reflect the priorities of white senators.

“There were documents that were chosen, not by Hispanics, not by African Americans in this body, but by Anglos,” he said. “No input from us in terms of what founding documents should in fact be considered by all children in this state.”

Hughes also told members there have been instances in various school districts where parents have raised concerns about lessons where students have been taught one race is inherently superior to another. He pointed to a particular instance in Highland Park Independent School District where parents were concerned about a book called Not My Idea: A Book About Whiteness.

But Sen. Borris Miles, D-Houston, pushed back against that premise, reading a passage from the book’s author about its intent to help children dismantle white supremacy.

"My point is that we cannot just pick and choose what we are going to teach as history and expect to change things and make things better,” Miles said. “It doesn’t work that way. This bill is eliminating and excluding some things, and including what you want to say."

Educators also worry the legislation will change how teachers can engage students in hard, but important, conversations about American current events that teachers often use to trace back to historical events.

“Kids get engaged and kids want to dig into your class when they get the relevance and they have some buy-in,” said Jocelyn Foshay, a Dallas Independent School District middle school teacher.

The bill, which mirrors legislation making its way through state legislatures across the country, has been coined the Critical Race Theory bill, though neither the House or Senate versions explicitly mention the academic discipline, which studies the way race and racism has impacted America’s legal and social systems.

The latest version of the bill also reintroduced an explicit ban of the teaching of The New York Times’ 1619 Project, which examines U.S. history from the date when enslaved people first arrived on American soil, marking that year as the country’s foundational date. That 2019 work from journalist Nikole Hannah-Jones won the Pulitzer Prize and was recently thrust back into the national spotlight after the University of North Carolina did not grant her tenure after conserative criticism of her work.

“To suggest that America is so racist at its core to be irredeemable and to suggest that people based on the color of their skin can never overcome biases and can never treat each other fairly, that’s a real problem,” Hughes said of the project.

Educators also worry the bill language is too vague and will allow students and parents to potentially use the legislation against them if they disagree with how they’re teaching history curriculum, regardless of the primary sources and historical texts teachers use to back up their lessons. It’s also unclear who would enforce these requirements and how schools or districts would handle these issues.

“It makes it so open for anyone to interpret it the way they want to interpret it,” said Juan Carmona, a history teacher in the Rio Grande Valley town of Donna

He sees this bill as a pushback to including more historical voices and perspectives in the teaching of history. In recent years, Texas started to offer Mexican American and African American studies courses to all high school students.

Over the past year, the phrase “critical race theory” has turned into a Republican rallying cry in an apparent pushback against increased conversations about diversity and inclusion and unpacking implicit bias.

Georgina Perez, who serves on the State Board of Education, slammed the bill and its supporters, saying they are using buzzwords for political gain rather than to improve education.

“They have no idea what critical race theory is, what it does, who the founders are. They've never read a book, much less a paragraph on it,” said Perez. “I understand that maybe some white people are uncomfortable. Well, dammit, when Black people were being lynched, they sure as hell weren't comfortable. Native Americans being removed from their land and Mexican Americans being shot to death in the middle of the night, that shit wasn't comfortable either.”

Erin Douglas contributed to this story.

Disclosure: New York Times has been a financial supporter of The Texas Tribune, a nonprofit, nonpartisan news organization that is funded in part by donations from members, foundations and corporate sponsors. Financial supporters play no role in the Tribune's journalism. Find a complete list of them here.

Posted by Angela Valenzuela at 5:09 PM