It's really sad that Texas will not be getting either what should have been $493.5 million annually due to the U.S. Census undercount, or a third congressional seat.  Drs. Dudley L. Poston, Jr. & Rogelio Sáenz break it down for us:

"For every person not counted in Texas, the state loses around $3,500 every year. Multiply the $3,500 by 141,000, which we estimate is a rough number of the undercount in Texas, and you end up with $493.5 million per year that Texas will not get in federal funds. Multiply that by 10 and you get $4.9 billion that Texas will not receive in federal funds over the next 10 years."

A $4.9 billion shortfall over the next decade is a terrible loss for Texans, whites included. Leadership, effort, and investment is what all of this would have required, but Abbott wasn't interested, unfortunately.

By Dudley L. Poston Jr. and Rogelio Sáenz FOR THE EXPRESS-NEWS 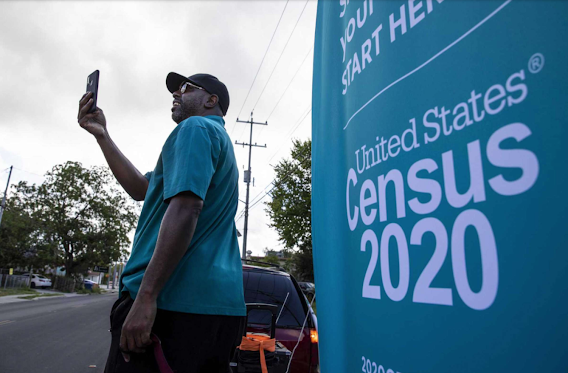 The U.S. Census Bureau recently released population counts from the 2020 census. Six states will have more House seats and seven states will have fewer. Texas was the big winner, picking up two new seats in the U.S. House. But apportionment analyses that we and others conducted in 2020 indicated that Texas would gain three, not two, new House seats. What happened?

Starting in 2018, President Donald Trump and his administration attempted to add a citizenship question to the 2020 census, and they also tried to exclude undocumented people from the census count. These efforts sought to discourage Latinos from being counted and, we believe, that it worked.

The new data from the 2020 census indicate that there was a serious undercount in Texas, numbering almost 141,000 people. But in the state of California, there was an overcount of nearly 120,000. Latinos account for almost 40 percent of the Texas and California populations. Why, then, would California have an overcount and Texas an undercount?

The governor of California, Gavin Newsom, devoted over $187 million in a statewide outreach and awareness program focused on counting all California residents in the 2020 census. It worked; a lot more people were counted in California than was anticipated.

What happened in Texas? Gov. Greg Abbott and his Republican colleagues did not provide funds for a campaign to increase the state’s count. Abbott never even set up a statewide committee to work toward increasing the participation of Texans in the census. Unlike Newsom in California, Abbott did virtually nothing to get a complete count of Texans. The result: Texas lost its expected third new seat.

Not only did Texas not receive its third new seat, but the state will also lose a lot of money between now and 2030. How much?

For every person not counted in Texas, the state loses around $3,500 every year. Multiply the $3,500 by 141,000, which we estimate is a rough number of the undercount in Texas, and you end up with $493.5 million per year that Texas will not get in federal funds. Multiply that by 10 and you get $4.9 billion that Texas will not receive in federal funds over the next 10 years.

Getting a complete count of Latinos and other people of color was not a priority of Abbott and Texas Republicans. The result is that Abbott’s inaction cost Texas the third congressional seat and tons of federal funds.

Or was that Abbott’s plan? Abbott is well-versed in the practice of leaving on the table federal funds designated for people of color and the poor. He and his fellow Republicans have deployed numerous strategies to suppress the vote of the growing Latino population and other groups of color. And he has waged wars against the state’s major cities, where people of color are concentrated. Abbott is a shrewd politician who we doubt was blindsided by the realization that his actions cost the state its third congressional seat and $4.9 billion in federal funds.

These are the political and economic costs associated with Republicans maintaining their hold on the politics of our state. Latinos who were not counted in the 2020 census will help Republicans maintain political domination when they start redistricting in the fall. This is yet another way in which Abbott and his fellow Republicans have sacrificed the interests of Latinos, Blacks and the poor to stem the Latino demographic wave that threatens to turn Texas blue. The fact that whites, too, get hurt by not getting the third congressional seat and foregoing $4.9 billion in federal funds represents collateral damage.

It makes no sense, politically or economically, not to count every Texan in the decennial census. Given Abbott’s track record for consistently choosing politics over the interests of Texans, we suspect he would not alter his actions if he were given another chance. The big losers are the people of Texas.

Dudley L. Poston Jr. is an emeritus professor of sociology at Texas A&M University. Rogelio Sáenz is a professor of demography at the University of Texas at San Antonio.

Posted by Angela Valenzuela at 10:19 PM