Although this piece fails to mention Texas, much less House Bill 3979 that just moved out of the Texas Senate early this morning, that's on its way to the Governor Abbott's desk, this piece succeeds in exposing this broader Trumpian agenda as follows:

"The language outlining 'divisive concepts' in the proposed legislation copies sections of Trump’s executive order from September of last year, which banned federal trainings designed to confront racism, sexism, and bias. President Joe Biden has since rescinded that order." 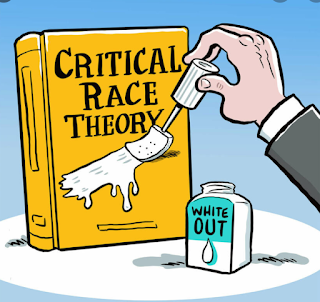 In Texas, as elsewhere, these laws which are largely unenforceable, will
nevertheless have a chilling effect on the teaching of racism, sexism, and systemic oppression in many of our nation's schools. When we know that one cannot teach not only U.S. history, but the U.S. Constitution itself, without addressing our country's racist past, all these bills are doing is whitewashing curriculum, even as they both exemplify and codify white fragility through what a local activist amply termed, "an avoidance curriculum."

Help yourselves, if you like, to last night's entire Texas Senate floor debate at this link that you can locate at 1:33:21 on the meter.

Welcome to the so-called "culture wars," my friends, an old, much-used trope. The whitewashing of curriculum is what you do when you seek to foment anger and distrust toward minorities and progressives as a means to hold onto your political incumbency because you lack either will or imagination to actually serve the people. And geez, do we have needs.

Lawmakers in eight states have introduced legislation that may make it harder for teachers to talk about racism, sexism, and bias in the classroom.

Over the past few months, Republican legislators in Idaho, Iowa, Louisiana, Missouri, New Hampshire, Oklahoma, Rhode Island, and West Virginia have drafted bills that would ban the teaching of what they deem “divisive” or “racist and sexist” concepts. The bills use similar language as an executive order former President Donald Trump put in place to ban diversity trainings for federal workers.

Some of these new bills also aim to put restrictions on workplaces or state contractors. All of the legislation uses similar phrasing in listing topics that would be off-limits to teach, including:

The language outlining “divisive concepts” in the proposed legislation copies sections of Trump’s executive order from September of last year, which banned federal trainings designed to confront racism, sexism, and bias. President Joe Biden has since rescinded that order.

Several of these bills have stalled or died in committee—in New Hampshire, where the legislation has been tabled, the state’s American Civil Liberties Union chapter has argued that it would violate First Amendment rights. In other states, though, the proposals are moving through the legislature.

In Idaho, the issue has derailed budget negotiations. House Republicans refused to fund the teacher salaries budget unless a provision was added prohibiting schools from advocating for social justice education, citing inaction on a separate “racist and sexist concepts” bill, according to Idaho Ed News.

The Iowa bill passed the state Senate in March, and has already paused state efforts to discuss race in schools. The Iowa Department of Education recently postponed a conference on social justice and equity in education, originally scheduled for April, in response to the bill, Iowa Public Radio reported.

“We are mindful of pending legislation that may impact the delivery and content of certain topics related to diversity, equity and inclusion and postponing the conference will ensure the Department and Iowa’s educators are best positioned to comply with any legislation,” an event page for the conference reads. The statement notes that the department will plan to hold a conference in the fall.

These bills come at the same time some states have taken other steps to limit the ways in which racism, sexism, and inequity are discussed in schools. In North Carolina, Lt. Gov. Mark Robinson, a Republican, has formed a task force dedicated to “exposing indoctrination in the classroom,” asking parents to report lessons. Idaho’s lieutenant governor, Janice McGeachin, also a Republican, recently announced that she would form a similar task force.

And earlier this year, lawmakers in several states pushed to ban schools from teaching curriculum designed around the 1619 Project, a New York Times series that aims to reframe United States history by putting the legacy of slavery and the contributions of Black Americans at its center.

“Right now, we’re in a moment where terms like systemic racism aren’t only used at universities, or among people who talk about race. These are commonly used terms now. So we see a little shifting of the tide of what people understand racism to be,” said Kristen E. Duncan, an assistant professor of secondary social studies education at Clemson University. “Making schools a place where students would not learn about it that at all is kind of an attempt to put the genie back in the bottle.”

Waves of pushback can be expected when calls for social change include curriculum, said Andrew Hartman, a professor of history at Illinois State University, who has written a book about the history of the culture wars in American schools.

“When there are social movements pushing for justice in terms of race, and sexuality, and gender, these movements are going to generate a lot of controversy,” he said. “Conservatives are going to push back however they can. And if they control state legislatures, that’s a good way to do it.”

Legislators who have drafted these bills say they hope to prevent critical race theory from being taught in schools.

Critical race theory is an academic practice, a way of examining U.S. society that acknowledges how racism has driven and continues to drive inequity. Legal scholars, including Derrick Bell, Kimberlé Crenshaw, and Alan Freeman, first developed the field. In the decades since, the framework has also been used to study education system, examining school segregation, and inequities in instruction, assessment, and school funding.

“It’s an approach to grappling with a history of white supremacy that rejects the belief that what’s in the past is in the past, and that the laws and systems that grow from that past are detached from it,” Crenshaw told TIME in September of last year.

Patricia Morgan, a Republican in Rhode Island who proposed the state’s divisive concepts bill, called critical race theory “a divisive, destructive, poisonous ideology” that encourages people to judge each other by the color of their skin.

“It makes white males oppressors ... and it makes everyone else the victims,” she said in an interview with Education Week.

But Adrienne Dixson, a professor of education policy, organization, and leadership at the University of Illinois who has edited several books on critical race theory in education, said that these lawmakers “completely misunderstand” what the practice is.

“Critical race theorists would say, absolutely, that people shouldn’t be discriminated against by virtue of their race or sex. We don’t locate individuals as responsible for structural racism,” Dixson said. Instead, she said, scholars acknowledge that racism informed the country’s founding principles, and that some groups have to “agitate and organize and demand and protest” to secure rights.

“I think in a sense, they’re setting up strawmen, and claiming that things are happening [in the classroom] that I think are not happening,” Maureen Costello, the executive director of the Center for Antiracist Education, said of the legislators proposing these bills.

For example, teaching about the legacy of slavery and its far-reaching impact on the United States today is “not about assigning blame to the students in front of you,” Costello said. “It’s actually about inspiring them to do better in their lives.”

Decades of scholarship and testimony from people of color have long demonstrated the persistent racial bias and inequities that exist in the U.S., from education to medical care to housing. Still, some legislators reject the idea that racism and sexism are still forces that shape American society, and don’t want teachers telling this to students.

“What inequities do we deal with today? Everybody has equal opportunity,” said state Sen. Rick Brattin, who sponsored the Missouri bill.

“We’re a nation ... of equal opportunity for people to prosper or not prosper. To say that everyone should have equity in property and all things, that’s the antithesis of America. That’s socialism,” Brattin said.

Proposed legislation could have a chilling effect on teachers

This is hardly the first time that states or school boards have aimed to stop the teaching of certain subjects or ideas, said Hartman.

From the 1920s through the 1950s, Southern states led successful efforts to ban instruction in evolutionary biology. In the 1940s, 50s, and 60s, state legislators and local school boards tried to prevent teachers from examining capitalism through a critical lens, or prevented teaching about socialism or communism at all, he said.

Still, Hartman said, it’s hard to imagine how “divisive concepts” legislation would be practically enforced, or that states would take the measures to do so. But any laws passed on this issue could still have a chilling effect on teachers, he said, if parents take it upon themselves to enforce them.

“This bill is very intentional in its approach to shut down equity work in districts. I think they can sugarcoat it however they want. That is what the bill is intended to do,” said Jenny Risner, the superintendent of Ames Community School District in Ames, Iowa.

Leaders in the district, which participated in the national Black Lives Matter at School Week of Action in February as part of its ongoing equity work, were asked to speak in front of the state’s House Oversight Committee after parents brought concerns to lawmakers. Goals for the week included supporting all students to feel affirmed at school; examining how the voices, accomplishments, and successes of Black people were represented in curriculum; and questioning whether any district instructional practices prevented students from bringing their “whole selves” to school.

Anthony Jones, the district’s director of equity, is concerned about how state leaders might decide what is or is not “divisive,” potentially shutting down lessons that could lead to productive change.

“When we’re having conversations about things that we’re unaware of or even uncomfortable with, we need to lean into that so we can learn,” Jones said.

Posted by Angela Valenzuela at 4:38 PM