These Texas republicans' days are numbered and they know it. They legislate like they're backed into a corner, fighting for their lives despite being the party in power. And they still lack a legislative fix to the Texas electrical grid where over a hundred Texans lost their lives in February's winter storm.

Their focus instead was on disenfranchising lower-income, people of color from the ballot box. In the long term, and the short term, as well, this is not sustainable.

There is no grand, lofty vision here. It's all about survival and protecting their incumbencies, the lowest level of resonance for a polity.

They're showing their every card and can no longer hide from their self-serving decisions and commitments, even despite their 6am vote when none of us were awake to observe this.

My friends, it is abundantly clear to me that if political disenfranchisement is their only play, they do not deserve to govern. For the rest of us, let this be the very same ground for radical hope.

To members of Congress, do take notice and pass "For the People Act (HR 1) and the John Lewis Voting Rights Act. 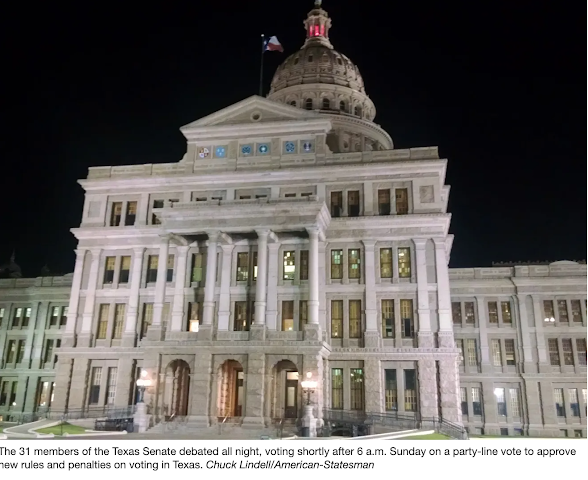 Senate Bill 7, known as the Election Integrity Protection Act, must be approved by the Texas House before midnight Sunday. The bill is eligible for a vote at 4:50 p.m. according to the House calendar.

Democrats criticized the bill's restrictions, particularly a ban on 24-hour voting and drive-thru voting that was popular with nonwhite voters last year in Harris County, for disproportionately affecting people of color.

"I represent a majority African American district, and we benefited from the drive-thru voting that you're trying to ban now. I feel like you're coming for my district," said Sen. Borris Miles, D-Houston, adding that leaders with the FBI, Department of Justice and Texas secretary of state's office acknowledged that the 2020 election was safe, secure and free of widespread fraud.

"We've had next to no fraud, and this has been documented at the federal level and the state level. But instead you're rewriting the Election Code," she said.

A look at the bill:GOP unveils final version of Texas elections bill, which includes more restrictions

SB 7 is one of several GOP efforts in statehouses around the country to narrow voting opportunities, particularly in urban counties that tend to vote Democratic, after Republicans echoed former President Donald Trump's claims that last year's presidential election was stolen. No widespread fraud was ever uncovered.

But Sen. Bryan Hughes, R-Mineola, defended his bill as Saturday became Sunday, and he was still at it as sunrise neared — rejecting claims that the bill targeted nonwhite voters or that it was a solution in search of a problem.

"The provisions apply equally across the state. They are not limited to a particular group or particular area," he said.

A rush to debate

The Senate and House had passed widely different versions of SB 7, leading to a conference committee to work out the differences.

That committee's final version of the bill was filed and distributed to senators at 3:36 p.m. Saturday. Less than three hours later, Hughes stood in the Senate and proposed waiving the rule that requires a 24-hour delay before the bill could be considered by the Senate.

Democrats, who had been huddling in private to discuss their options only a few minutes earlier, objected to the speed of events.

"I would ask that we take the time that's necessary to understand the changes, to understand the entirety of this before we are asked to vote on a bill that affects every single voter in Texas," said Sen. Beverly Powell, D-Burleson.

Hughes replied that he planned to give senators a private briefing at 8 p.m., bringing them up to speed on a bill that grew from 23 pages to 67 pages in conference committee — adding that there would be plenty of time to discuss SB 7 in public during what he expected to be a long and vigorous floor debate that would not begin until after 10 p.m. to allow more time to study the legislation.

Sen. Jose Menéndez, D-San Antonio, said the late debate would occur when most Texans would not be watching in person or online.

"How did you decide that 10 p.m. tonight was the right time? Does that seem like the best time to be creating very important policy-making decisions after 10 p.m.?" he said. "Tomorrow we have the full day to debate any legislative measures, do we not?"

But Hughes noted the looming deadline — all conference committee reports must get a vote by midnight Sunday — and Republicans voted as a bloc to waive the 24-hour delay.

The Senate returned to SB 7 shortly after 10:30 p.m. by taking up a resolution giving the conference committee permission to include provisions that had not been part of the bills passed by the House and Senate.

Hughes, who was co-chairman of the conference committee, said many of the sections added to SB 7 were taken from other GOP election bills that had passed the Senate or were considered in committee, while other ideas cropped up during negotiations with his co-chairman, Rep. Briscoe Cain, R-Deer Park.

Sen. Nathan Johnson, D-Dallas, called the resolution an affront to the legislative process.

"This seems more like you’re trying to get in bills that you couldn’t pass, or you thought of some other way to do some things that many of the members of this chamber don’t want you to do," Johnson said.

A pattern of late nights

Partisan disagreements have pushed lawmakers into several late-night and early-morning sessions in the past several weeks as Republicans pressed an aggressively conservative agenda this session.

A rancorous debate over SB 7 pushed the Texas House beyond 3 a.m. on May 7, setting the stag for this weekend's showdown.

And a fight over House Bill 3979 found the Senate voting at 2 a.m. on May 22 over legislation to limit how public school teachers handle discussions of race and racism in the classroom.

The Senate made wholesale changes on the floor, putting the bill in danger when House Democrats successfully argued that several amendments violated House rules.

With no time to fix the bill by traditional means, Lt. Gov. Dan Patrick allowed Hughes to make a motion to recede, a little-known parliamentary maneuver that stripped the bill of all Senate changes and passed HB 3979 in its original House form on a party-line vote.

Democratic objections that the Texas Constitution did not allow bills to be passed that late in the session were overruled.

The session ends on Monday, with lawmakers still not having agreed upon priority legislation, including fixing the Texas electrical grid after millions of Texans were plunged into cold and darkness during the deadly February winter storms.

Posted by Angela Valenzuela at 10:16 AM