Glad to see more press coming out on this horrible HB 3979. I wholeheartedly agree with University of Houston history professor Stephanie Boyce who is also affiliated with the Texas Alliance of Black School Educators (TABSE) that rather than restricting student activism, “We should be trying to find ways to make these processes more inclusive, to bring students into the process even more.”

Republican leaders think that "boundless prosperity" is possible without youth ever getting to know too much about the political process. I'm sure this isn't what they thought about with respect to their own children acquiring the skills of political engagement. This is a totally veiled attempt, as I comment herein, to disenfranchise our youth through their own miseducation. 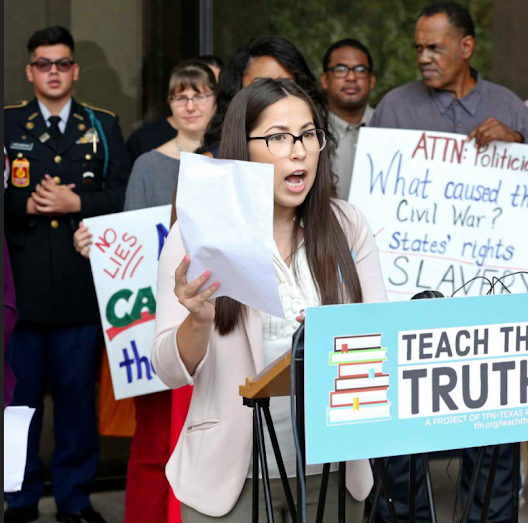 Carisa Lopez, representing the Texas Freedom Network, delivers her message to the media outside after speaking to the State Board of Education as it hears comments on proposed changes to the state's social studies curriculum at its meeting in Austin on September 11, 2018.

After months of denouncing calls for the country to more fully reckon with its discriminatory roots, Texas Republicans are joining national conservatives in a push to restrict how teachers can talk about race and racism.

A bill that supporters say will strip politics from public education, but that critics call a thinly veiled attempt to whitewash American history, has already passed the Senate and could be voted on by the House as early as Friday. Both chambers are controlled by Republicans.

The measure targets critical race theory, an academic movement that has become a buzzword among Republicans who dispute the existence of white privilege and systemic racism. The bill would limit teachers from pushing its core tenets, such as connecting modern day inequities to historical patterns of discrimination.

Racism is “part of our reality, and that’s part of our shame, and we shouldn’t do anything to cover that up,” said Rep. Steve Toth, a Republican and the bill’s author in the House. “But what we should also not do is blame that on tender little children that have done nothing wrong.”

The backlash stems in part from the 1619 Project by The New York Times that asserted slavery and its remnants were more integral to the country’s founding than is commonly acknowledged. The essay collection, commemorating the arrival of the first enslaved Africans to colonial Virginia, was awarded a Pulitzer Prize and has been adapted into children’s literature and lesson plans for educators.

School districts in some states are adapting parts of the project into their curriculum, and the Biden administration announced last month that it wants to prioritize education grants to programs that “take into account systemic marginalization, biases, inequities and discriminatory policy and practice in American history.”

The Texas legislation, sponsored in the Senate by Sen. Brandon Creighton of Conroe, would bar schools from requiring teachers to talk about current events, and prohibit teachers from discussing certain viewpoints, including that some people are “inherently racist, sexist, or oppressive, whether consciously or unconsciously.”

Stephanie Boyce, who teaches Black history at the University of Houston and is affiliated with the Texas Alliance of Black School Educators, said teachers are already trained to present diverse viewpoints when discussing subjects. She said supporters are simply trying to block students from learning uncomfortable truths about the country or engaging more actively in the political process.

“It’s not even like they’re trying to make it complicated to see what’s happening,” Boyce said, adding about the restrictions on civic action: “We should be trying to find ways to make these processes more inclusive, to bring students into the process even more.”

She called it “ironic” that “you have people like me, an African American woman whose ancestors built this country, and the Capitol, and all the things that we did for free — that we should have to come before a body of legislators, the majority of which are white and male, and be told what we can and cannot say about race, sex and power dynamics.”

No more class credit for activism

If enacted, the bill would also bar educators from giving students credits for engaging in “political activism,” which includes lobbying legislators, city council members, attending marches and other forms of civic action.

Teachers should not have to “push a particular political agenda,” Creighton told colleagues last month, “but certainly to promote America and our republic for what it is, which is the greatest country in the history of the world, and certainly the most philanthropic.”

Another bill passed by the House on Wednesday would establish a Republican-appointed advisory panel to “promote patriotic education and increase awareness of the Texas values that continue to stimulate boundless prosperity across this state.”

Angela Valenzuela, an education policy professor at the University of Texas at Austin who testified against efforts in Arizona to ban ethnic studies from their classrooms, said Toth and Creighton’s proposal potentially violates free speech and other constitutional rights.

“This is part of a larger agenda to disenfranchise our communities, because we know that people who are critical and involved, that they vote,” she said.

Black, Hispanic and other children of color make up the large majority of students enrolled in Texas schools, according to state education figures.

“The idea that there is going to be a law that potentially bars teachers from discussing certain topics, I find, quite frankly, very offensive,” said Albert Broussard, a Black history professor at Texas A&M University who himself has been critical of parts of the 1619 Project. “It puts students at a tremendous disadvantage, because they’re simply going to fall behind.”

Several Texas-based teachers’ groups and left-leaning advocacy organizations have also come out against the measure, saying it would both hinder classroom discussion and take away student opportunities to participate in the democratic process — something valuable not only for young adults, but also for legislators debating bills that would affect them.

“The policymakers really do benefit from getting the youth perspective, and for the youth themselves, it has been an electric experience for them, having these policymakers acknowledge … the reality (of) what’s happening at schools and how it’s affecting them,” said Vanessa Beltran, a mental health policy fellow at the nonprofit Girls Empowerment Network.

Rep. James Talarico, a Democrat from Round Rock and a former public school teacher, said Toth and Creighton’s legislation conflicts with the state’s existing curriculum standards, which require educators to discuss current events.

“Students desperately need to be able to understand current events, determine fact from fiction and develop media literacy,” he said. “If public education is here as a safeguard for democracy, analyzing and understanding current events is critical to that goal.”

Posted by Angela Valenzuela at 9:32 AM