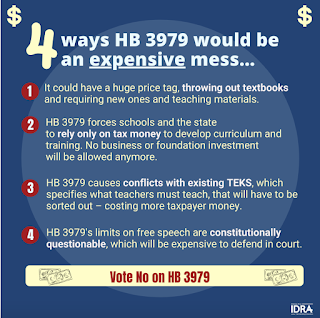 Texas State Representative Dr. Mary Gonzalez' testimony yesterday evening was powerful, as were other legislators like Rep. Talarico, and Rep. Jarvis Johnson, who in last night's floor debate in the Texas House said that there is “not one agency that has compelled a teacher to teach critical race theory, so this author literally is legislating nothing — an overreach of power.”
The problem today is that this awful bill got voted out of the House at 1AM this morning and is closer to becoming law, as well as "an expensive mess," as laid out in this IDRA flyer. Also do note here the 68 organizations opposing this legislation: 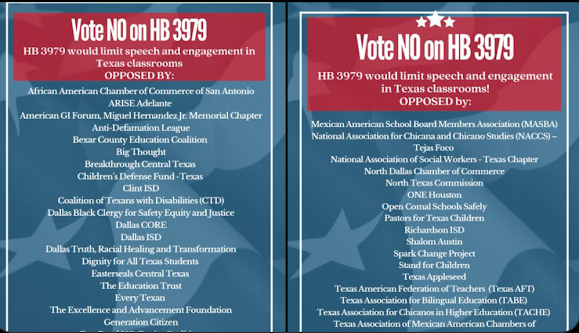 It is not at all an exaggeration to say that bills like these put our democracy at risk, representing the opposite of democratic schools where young people are encouraged to be active, deliberative, participating members of their communities.
This statute minimally creates a vacuum in the understanding of our nation's history, making students vulnerable to authoritarianism and extremism all because white legislators feel uncomfortable about our nation's inescapable white supremacist legacy. Squandered is the opportunity for democracy to take on not just accurate, but also new, invigorated meanings as Rep. Gonzalez and others so eloquently expressed yesterday evening.
All of this lays bare why we must redouble our efforts to vote, get the vote out, and weigh in on voter suppression bills so that we can be better represented in our halls of government.
-Angela Valenzuela
#DemocracyAtRisk

House Bill 3979 is part of a national effort by red-state legislatures to ban or limit critical race theory. That academic discipline examines how racism has shaped legal and social systems within the United States. 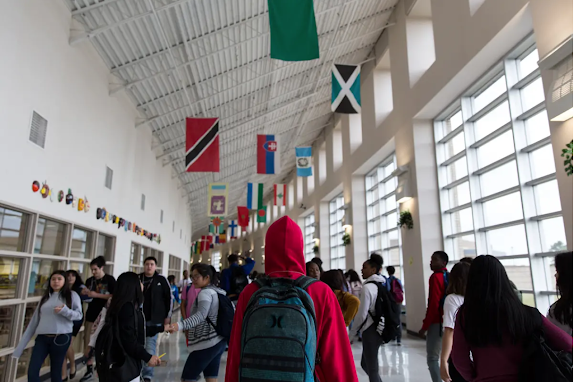 The Texas House has given preliminary approval to legislation that takes aim at critical race theory and would limit what public school students can be taught about the United States’ history of subjugating people of color.

By a vote of 81-52, the House passed House Bill 3979 by Rep. Steve Toth, R-The Woodlands, early Tuesday morning, following about four hours of debate. The support in the chamber came over opposition from dozens of education, business and community groups. The lower chamber will have to vote again before it can send the legislation to the Senate, which has already approved a similar proposal. Lt. Gov. Dan Patrick has been vocal about his support of the legislation.

HB 3979 is part of a national effort by red-state legislatures to ban or limit critical race theory, an academic discipline that examines how racism has shaped legal and social systems within the United States and views race as a social construct. Toth's legislation says a teacher cannot "require or make part of a course" a series of race-related concepts, including the ideas that “one race or sex is inherently superior to another race or sex,” or that someone is “inherently racist, sexist, or oppressive” based on their race or sex.

“House Bill 3979 is about teaching racial harmony by telling the truth that we are all equal, both in God’s eyes and our founding documents,” Toth said as he introduced the legislation on the House floor Monday.

Repeatedly invoking critical race theory, Toth later asked: “Do you want our Texas kids to be taught that the system of government in the United States and Texas is nothing but a cover-up for white supremacy? Do you want them to be taught a souped-up version of Marxism?”

Democrats blasted the bill — as well as Toth — as uninformed. He got perhaps the strongest pushback from Rep. Mary González of Clint, who said she studied critical race theory as part of the doctoral degree she earned two years ago.

“We are making very real decisions about access to educational resources without even having a full understanding of what we’re talking about,” Gonzalez said, “and I can speak to this because I literally spent 10 years getting a Ph. D. in this in which I have seen the opposite of what you’re talking about happen, that compassion and love stem from this theory, stem from this research and stem from the academic writings” related to it.

Democrats also took issue with — and unsuccessfully sought to remove — parts of the bill that would limit discussion of current events in the classroom, prohibit private funding for social studies courses and prevent teachers from requiring for credit any work with an organization involved in legislative lobbying or political activism.

Toth nonetheless accepted several amendments from Democrats expanding the list of “founding documents” that the legislation says should be included in teaching. For example, one of the amendments added a slew of documents related to the civil rights movement, such as Martin Luther King Jr.’s “Letter from a Birmingham Jail” and his “I Have a Dream” speech.

At the same time, Toth added an amendment to the bill banning mandatory teaching of The 1619 Project, a program developed by The New York Times Magazine that is based on critical race theory. And at Toth's urging, the House rejected a Democratic amendment to ensure students learn about the deadly U.S. Capitol riot earlier this year. Toth said the amendment had "nothing to do with the bill."

Around 70 education, business and community groups across the state have voiced their opposition to Toth’s bill, citing concerns that it would discourage civic engagement and chip away at local decision making within individual communities.

“This bill would restrict local control with our school districts and affect how teachers discuss current events with their students,” the North Texas Commission, a public-private partnership of education and business groups wrote in a letter opposing the bill. “This legislation conflicts with current learning standards which allow teachers to bring emerging topics to the classroom for discussion and critical thinking.”

“We have come to this body and have made the decision to tell our teachers how and what to teach,” said Johnson, who is Black, adding that there is “not one agency that has compelled a teacher to teach critical race theory, so this author literally is legislating nothing — an overreach of power.”

Kate McGee contributed to this story.

Posted by Angela Valenzuela at 8:48 AM