I Could Not Allow That To Stand': Ocasio-Cortez Rebukes Republican For Vulgar Insult

New York Congresswoman Alexandria Ocasio-Cortez was verbally accosted this week on the steps of our nation's capitol by Congressman Ted Yoho, who represents the 3rd District of Florida (that includes Gainesville and Palm Coast). Check out his website and notice that there is no apology to her for him calling her a "fucking bitch."
These are his words, not mine or AOC's. A reporter heard him, too. Loudly and clearly.
Like she says, violence against women is common. That's no surprise. What is ill-conceived, as she later said on the House floor, is that any man would, knowingly or unknowingly, give permission to another person to act the same way toward their own wife or daughter.
By the looks of it, Yoho had nowhere to hide. Que bien. Good. May this be a helpful lesson to you, Congressman Yoho, about the kind of evil spirit you release when you give yourself permission to be rude and disparaging toward any human being, let alone your formidable congressional colleague.
Shame on you, Congressman Yoho. And shame on anyone who would treat another this way. We, as women, women of color, do not have to accept this.
I urge all to read this story and then listen to her devastating rebuke of Congressman Yoho. View below the pertinent videos on this horrible episode that she fully redeems with her words and acumen. I've viewed her Congressional presentations over the years. AOC is an honest, caring, hard-working person who is courageous, gorgeous, and with a razor sharp intellect that might be what makes her, in Yoho's words, "dangerous."
Thank you, AOC for standing up to this nobody. Yoho's response amounts to fascist gaslighting, where he's telling you and the world what to believe, as opposed to what actually happened, to which a member of the press itself could attest. I am reminded by Hannah Arendt's famous quote:
“the greatest evil perpetrated is the evil committed by nobodies, that is, by human beings who refuse to be persons.”
The dehumanization of "the other" that Yoho and Trump both enact is at the core of her brilliant rebuke and her refusal to be gaslighted.
AOC, you are a force of nature. God bless you. You are indeed, "dangerous." In all the ways that we and the planet need you to be. The world is in a such better place because you are in it. More power to you!
-Angela Valenzuela
I Could Not Allow That To Stand': Ocasio-Cortez Rebukes Republican For Vulgar Insult
July 23, 202012:34 PM ET 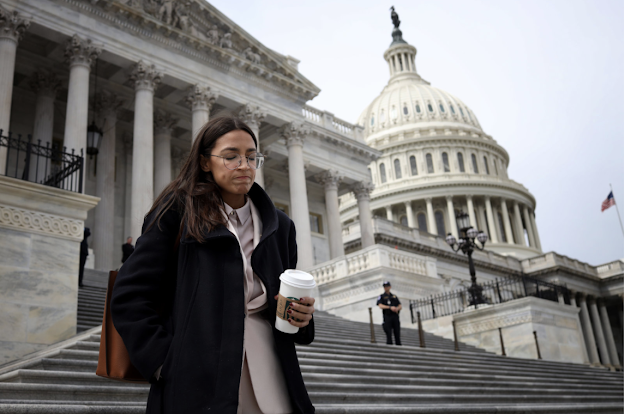 Rep. Alexandria Ocasio-Cortez, seen here in March, spoke on the House floor Thursday to address vulgar and sexist comments she says were directed at her by a Republican colleague.
Win McNamee/Getty Images

Rep. Alexandria Ocasio-Cortez, D-N.Y., took to the House floor Thursday morning to admonish the insults hurled at her by Rep. Ted Yoho, R-Fla., earlier this week.
Yoho confronted Ocasio-Cortez on the steps of the Capitol on Monday, Ocasio-Cortez said, calling her "disgusting" for linking poverty to crime rates in New York City.
"I was minding my own business walking up the steps, and Rep. Yoho put his finger in my face. He called me disgusting. He called me crazy. He called me out of my mind. And he called me dangerous," she said.
The congresswoman said she told Yoho his comments were rude and walked away to cast her vote. Then, as The Hill first reported, Yoho was overheard using a vulgar insult often aimed at women.

"There were reporters in the front of the Capitol, and in front of reporters Rep. Yoho called me, and I quote, a 'f*****g bitch,' " she said.
Ocasio-Cortez said Yoho was accompanied by Rep. Roger Williams, R-Texas, who did not interject on her behalf but instead joined in on insulting her. Williams has denied hearing or participating in the incident.
Ocasio-Cortez, a key voice in the progressive movement and a frequent target of Republicans, said that kind of verbal abuse isn't new and she's concerned about an increasing acceptance of dehumanizing and misogynistic language toward women.
"This issue is not about one incident. It is cultural. It is a culture of lack of impunity, of accepting of violence and violent language against women and an entire structure of power that supports that," she said.
Watch her remarks here. (Note: The video includes the profanity.)
Yoho reflected on his comments a day earlier on the House floor. Without naming Ocasio-Cortez, Yoho apologized for the "abrupt manner of the conversation I had with my colleague from New York."
He said he "cannot apologize for my passion" over the issue of poverty, having experienced it himself.
On the allegation that he used a pejorative, Yoho said, "Having been married for 45 years with two daughters, I'm very cognizant of my language. The offensive name-calling, words attributed to me by the press, were never spoken to my colleagues, and if they were construed that way, I apologize for their misunderstanding."
Ocasio-Cortez said Yoho's comments on Wednesday prompted her to address the controversy. She described his remarks as making "excuses for his behavior."
"I could not allow my nieces, I could not allow the little girls that I go home to, I could not allow victims of verbal abuse, and worse, to see that. To see that excuse, and see our Congress accept it as legitimate and accept it as an apology and to accept silence as a form of acceptance. I could not allow that to stand," she said.
She reprimanded Yoho for using his family members as a "shield" for his foul language.
"Having a daughter does not make a man decent. Having a wife does not make a decent man. Treating people with dignity and respect makes a decent man. And when a decent man messes up, as we all are bound to do, he tries his best and does apologize," she said.
"I am someone's daughter, too. My father, thankfully, is not alive to see how Mr. Yoho treated his daughter," she went on to say. "My mother got to see Mr. Yoho's disrespect on the floor of this House towards me on television. And I am here because I have to show my parents that I am their daughter and that they did not raise me to accept abuse from men."
Following Ocasio-Cortez's remarks, Democratic colleagues joined in condemning Yoho's comments and called on him to issue a formal apology.
"What my colleague from Florida did was unacceptable," said Rep. Pramila Jayapal, D-Wash. "It was violent. It was sexist. And I do believe he needs to apologize. Not because it's going to make our colleague Ms. Ocasio-Cortez feel any better, but because he too needs to learn what unacceptable behavior looks like and rise to the level of the office that he has been elected to."
Speaking to reporters later on Thursday, House Minority Leader Kevin McCarthy, R-Calif., said he thought Yoho's response was sufficient.
"In America, I know people make mistakes. We're a forgiving nation. I also think when someone apologizes, they should be forgiven," he said. "I don't understand that we're going to take another hour on the floor to debate whether the apology was good enough or not."
Asked if his party had a "women problem," McCarthy said there are more women in the Republican Party running for Congress than at any other time in history.
In her weekly press conference, House Speaker Nancy Pelosi, D-Calif., called Yoho's comments a "manifestation of attitudes in our society" and noted that she has been called offensive names for the past 18 years.
"The word I use for them is 'condescending' in addition to being disrespectful," Pelosi said.
"There's no limit to the disrespect or the lack of acknowledgement of the strength of women and nothing is more wholesome for our government, for our politics, for our country, than the increased participation of women and women will be treated with respect," she said.
Posted by Angela Valenzuela at 4:43 PM