The U.S. Deported a Million of it's Own Citizens to Mexico During the Great Depression, by Becky Little

As Becky Little describes here, our country has a terrible past of deporting its own citizens. "Ethnic cleansing" and "white power" —white supremacist—politics and ideologies guide such policies.
A million citizens were deported to Mexico during the Great Depression of the 1930s. Even though I know this is still happening as a tactic used by Trump and others, I hope Mexicans will ultimately, some day, stop getting racially profiled and scapegoated for our country's ills.
Let's vote in November and get Trump and his party out of office.
-Angela Valenzuela
The U.S. Deported a Million of it's Own Citizens to Mexico During the Great Depression, by Becky Little

In the 1930s, the Los Angeles Welfare Department decided to start deporting hospital patients of Mexican descent. One of the patients was a woman with leprosy who was driven just over the border and left in Mexicali, Mexico. Others had tuberculosis, paralysis, mental illness or problems related to old age, but that didn’t stop orderlies from carrying them out of medical institutions and sending them out of the country.
These were the “repatriation drives,” a series of informal raids that took place around the United States during the Great Depression. Local governments and officials deported up to 1.8 million people to Mexico, according to research conducted by Joseph Dunn, a former California state senator. Dunn estimates around 60 percent of these people were actually American citizens, many of them born in the U.S. to first-generation immigrants. For these citizens, deportation wasn’t “repatriation”—it was exile from their country.
The logic behind these raids was that Mexican immigrants were supposedly using resources and working jobs that should go to white Americans affected by the Great Depression. These deportations happened not only in border states like California and Texas, but also in places like Michigan, Colorado, Illinois, Ohio and New York. In 2003, a Detroit-born U.S. citizen named José Lopez testified before a California legislative committee about his family’s 1931 deportation to Michoacán, a state in Western Mexico.
“I was five years old when we were forced to relocate,” he said. “I…bec[a]me very sick with whooping cough, and suffered very much, and it was difficult to breathe.” After both of his parents and one brother died in Mexico, he and his surviving siblings managed to return to the U.S. in 1945. “We were lucky to come back,” he said. “But there are others that were not so fortunate.”
The raids tore apart families and communities, leaving lasting trauma for Mexican Americans who remained in the U.S. as well. Former California State Senator Martha M. Escutia has said that growing up in East Los Angeles, her immigrant grandfather never even walked to the corner grocery store without his passport for fear of being stopped and deported. Even after he became a naturalized citizen, he continued to carry it with him. 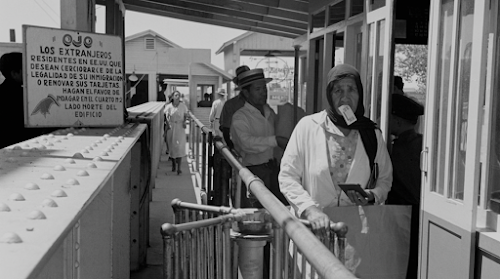 Relatives and friends wave goodbye to a train carrying 1,500 people being expelled from Los Angeles back to Mexico in 1931. NY Daily News Archive/Getty Images

The deportation of U.S. citizens has always been unconstitutional, yet scholars argue the way in which “repatriation drives” deported non-citizens was unconstitutional, too.
“One of the issues is the ‘repatriation’ took place without any legal protections in place or any kind of due process,” says Kevin R. Johnson, a dean and professor of public interest law and Chicana/o studies at the University of California, Davis, School of Law. “So you could argue that all of them were unconstitutional, all of them were illegal, because no modicum of process was followed.”
Instead, local governments and officers with little knowledge of immigrants’ rights simply arrested people and put them on trucks, buses or trains bound for Mexico, regardless of whether they were documented immigrants or even native-born citizens. Deporters rounded up children and adults however they could, often raiding public places where they thought Mexican Americans hung out. In 1931, one Los Angeles raid rounded up more than 400 people at La Placita Park and deported them to Mexico.
These raids were “different in some ways from what’s going on today,” Johnson says. Although the federal government in the 1930s did prosecute 44,000 people under Section 1325—the same law that criminalizes unauthorized entry today—these criminal prosecutions were separate from the local raids, which were informal and lacked any due process.
“There’s also a much more active group of lawyers advocating on behalf of immigrants [today],” he says. “In the 1930s, there was nothing like that.”
Although there was no federal law or executive order authorizing the 1930s raids, President Herbert Hoover’s administration, which used the racially-coded slogan, “American jobs for real Americans,” implicitly approved of them. His secretary of labor, William Doak, also helped pass local laws and arrange agreements that prevented Mexican Americans from holding jobs. Some laws banned Mexican Americans from government employment, regardless of their citizenship status. Meanwhile, companies like Ford, U.S. Steel and the Southern Pacific Railroad agreed to lay off thousands of Mexican American workers.
READ MORE: How Border-Crossing Became a Crime in the United States 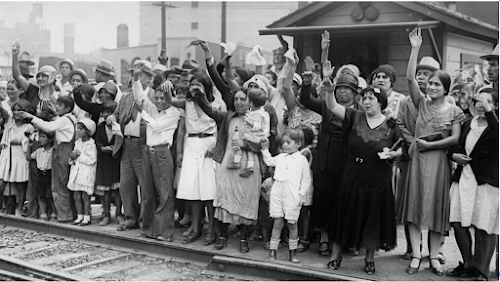 However, modern economists who’ve studied the effect of the 1930s “repatriation drives” on cities argue the raids did not boost local economies. “The repatriation of Mexicans, who were mostly laborers and farm workers, reduced demand for other jobs mainly held by natives, such as skilled craftsman and managerial, administrative and sales jobs,” write economists in a 2017 academic paper circulated by the non-partisan National Bureau of Economic Research. “In fact, our estimates suggest that it may have further increased their levels of unemployment and depressed their wages.”
Hoover lost the presidential election in 1932 because voters—who now referred to shanty towns as “Hoovervilles”—blamed him for the ongoing Depression (indeed, Hoover’s decision to raise import tariffs did prolong the Depression at home and abroad). The next president, Franklin Delano Roosevelt, didn’t officially sanction “repatriation drives,” but neither did he suppress them. These raids continued under his administration and only really died out during World War II, when the U.S. began recruiting temporary Mexican workers through the Bracero Program because it needed the wartime labor.
In 2005, California state Senator Joseph Dunn helped pass the “Apology Act for the 1930s Mexican Repatriation Program.” California deported about 400,000 people during that time, and the act officially apologized “for the fundamental violations of their basic civil liberties and constitutional rights committed during the period of illegal deportation and coerced emigration.”
The act also called for the creation of a commemorative plaque in Los Angeles. In 2012, the city unveiled the plaque near the site of a 1931 La Placita Park raid. The next year, California passed a law requiring its public schools to teach “repatriation drive” history, which until recently has been largely overlooked.
READ MORE: The Brutal History of Anti-Latino Discrimination in the U.S.
TAGS
IMMIGRATION
BY
BECKY LITTLE
·
·
·
·

Posted by Angela Valenzuela at 6:32 PM

Email ThisBlogThis!Share to TwitterShare to FacebookShare to Pinterest
Labels: Immigrants