This finding is rather stunning: "The median age for White non-Hispanics rose to 43.7 years — more than a decade older than the median Hispanic of any race — with Black and Asian American residents in between."

Another eye-popping statement: "The decade after 2010 would be the first one since the first population count was taken in 1790 that the White population didn’t grow, according to Frey."

I welcome this diversity at the same time that I can see how it contributes to white's anxieties about a loss of privilege and centrality—that they should actually never have had.  Pre-contact America—before the arrival of Europeans—was a model of diversity and largely peaceful relations among Indigenous peoples.

Rather than how they get depicted by Hollywood—as if all Native Americans were Plains Indians—at least three quarters were horticulturalists. Europeans didn't just settle anywhere. Rather they conquered places where Native peoples lived. That's why so many names, including towns, rivers, and states bear Indigenous names.

"Texas" or "Tejas," in Spanish, are derivatives of the Caddo Indian word "teyshas" or "thecas," meaning friends or allies as you can read about here. Why don't we all go back to being friends and allies as our Native ancestors would have wanted?

Thanks to Jorge Haynes for sharing.

(Bloomberg) -- U.S. racial and ethnic minorities accounted for all of the nation’s population growth during the last decade, according to new Census Bureau estimates.

The data underscore the nation’s growing diversity and suggest that the trend will continue as the White population ages and low birth rates translate to a declining share. Non-Hispanic Whites declined to 60.1% of the populace in 2019 and their number shrank by about 9,000 from the 2010 Census to slightly more than 197 million.

Over the same period, the U.S. added 10.1 million people identified as Hispanic. The median age for White non-Hispanics rose to 43.7 years — more than a decade older than the median Hispanic of any race — with Black and Asian American residents in between. 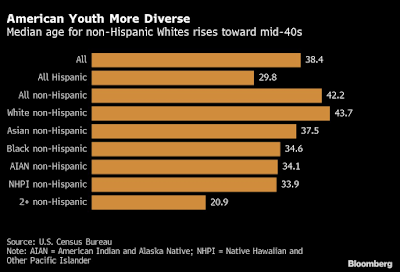 “The declining White population share is pervasive across the nation,” according to a report by William Frey, senior fellow at the Brookings Institution. The decline was “accentuated in the past few years by a reduction of births among young adult White women and an uptick in deaths, perhaps associated with drug-related ‘deaths of despair.’”

If the data are confirmed by the 2020 census that’s underway, the decade after 2010 would be the first one since the first population count was taken in 1790 that the White population didn’t grow, according to Frey. 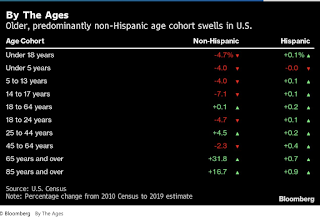 White people’s share of the population declined in all 50 states, increasing only in the District of Columbia, according to the Brookings analysis. It fell in 358 of the 364 U.S. metropolitan areas and in 3,012 of its 3,141 counties.

More the one quarter of the 100 largest metropolitan areas have minority-White populations, including Atlanta, Dallas, Los Angeles, New York and Washington, D.C. Leading the states with the highest share of White residents last year were Maine, Vermont, West Virginia and New Hampshire. 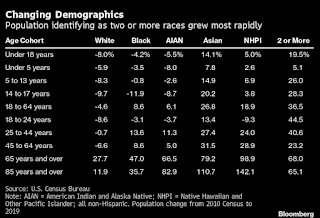 For more articles like this, please visit us at bloomberg.com
©2020 Bloomberg L.P.
Posted by Angela Valenzuela at 1:36 PM