To the Texas GOP, “Freedom of Choice” During a Pandemic Means the Freedom to Die for Profit

As Cristina Tzintzun maintains, Republicans' growth-at-all-costs economic model is so incredibly harmful and is indeed a consignment to destitution for so many. Workers shouldn't be in this situation.  At least we have a required-mask mandate in place right now in Texas public spaces.  However, as evident in the fraying of Texas Gov. Greg Abbott's republican party base (read "Texas GOP’s virtual convention reveals a party at sea," the level of selfishness about this under the guise of interfering with people's rights is staggering.

We should be very encouraged, by the way, by the emerging youth vote as you can read about in today's Austin American-Statesman piece titled, "Youth Vote a Surprise Factor in Runoffs: Voters under 40 made up about 37% of the Travis County Electorate," here in Austin.

It's a rather funny article about how what played in the July 14th primary election was a radical departure from the past as follows:


In primary runoffs, Austin’s voters are usually “very old, very white, very establishment,” said Mark Littlefield, a local pollster, lobbyist and consultant for Democrats. In primary runoffs “the joke we make is we all know who those 30,000 voters are — the same 70-year-old men and women that always are going to vote,” Littlefield said.

This is truly excellent news!  Young people are voting at unprecedented levels.  I trust that this is happening throughout Texas and the nation given the recent wave of activism. Still, we can't say it enough. Let's all vote in November and get this governor, this president, and this party out of office.

Do read Cristina's powerful piece below.

To the Texas GOP, “Freedom of Choice” During a Pandemic Means the Freedom to Die for Profit 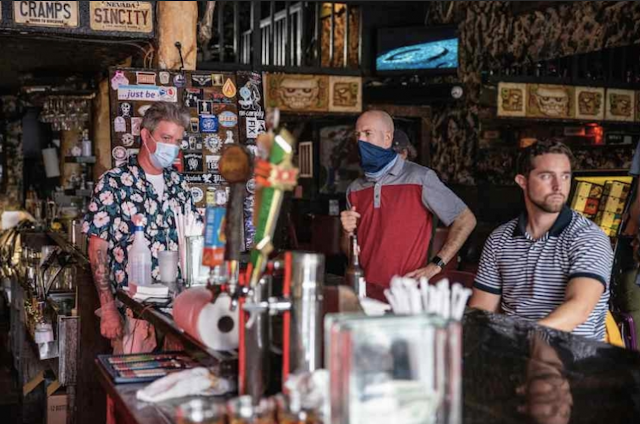 In Texas, we now have the dubious distinction of having joined the six other states with over 100,000 COVID-19 cases. In Texas, like in many other GOP controlled states, our Governor and Lt. Governor took their cues on how to respond to COVID-19, not from health experts but from the political whims of Donald Trump, who proved to have a questionable grasp on how the disease worked when he suggested injecting disinfectant and using UV light to cure patients of COVID-19.
Today in Texas, thousands of new cases are being reported daily. Hospitals in Houston and across the state are at near capacity. Adult COVID-19 patients are being transferred to Texas children’s hospitals to meet the exploding healthcare crisis in Harris County, the state’s most populous region. On June 26, Gov. Greg Abbott (R) was forced to backpedal on his promise that Texas was going to remain “wide open for business.” And he shut-down bars and reduced seating at restaurants, just five weeks after he allowed them to reopen.
I am lucky. I’m able to keep working from home, but both of my parents have lost their regular income and are struggling to get by in the new COVID-19 reality. Before COVID-19 my parents lived below the poverty line. My 62 year-old diabetic mom, who doesn’t have more than a ninth grade education, worked as a Spanish language interpreter at a hospital.  When COVID-19 began spreading, she quit her job. For her going to work literally became a life or death choice. My dad ran a small fair trade business selling jewelry from Mexico, last year he personally made $18,000. Now, both my parents get their food from local pantries and food banks.
Yet, my life did change dramatically post COVID-19, because two weeks before Texas shut down on March 19, I was crisscrossing the state running as a progressive in the Democratic primary for the Senate, talking to voters about the economic pain they were already living before COVID-19  (in a 12-way race I missed making it into the run off by 1.5%)
As an organizer and progressive, I have spent nearly two decades trying to disrupt the Right’s narrative and grip on power. Today, I see the cracks in GOP philosophy turning into disastrous fault lines.
Texas Republican leaders are struggling to deal with the reality of an opponent that their statewide power can’t seem to beat into submission. Unable to hide from the hard facts about how quickly the disease is spreading, Gov. Abbott acknowledged in a leaked recording, “Whenever you have a reopening… it actually leads to an increased spread."

The pandemic is proving to be the greatest political opponent Republicans in the state have confronted in over 30 years. It challenges not only the GOP’s political power, it reveals the failure of their growth-at-all costs economic model. To preserve that model, and by extension the status quo, Texas Republicans have fought off any environmental or workers’ rights regulations and handed out huge tax giveaways to some of the largest corporations in the world.

Texas Republicans were unable to withstand the pressure of an on-going closure that had economic consequences for their deep pocketed donors who demanded and received a hasty reopening. Republican elected officials had a choice: Support massive government intervention and dramatically expand the social safety net (including universal paid sick leave, increased unemployment benefits, and a moratorium on rent and mortgage collection), or reopen early and risking the well-being of millions of Texans. They chose the latter.
Within three weeks of Texas’ March shut down, Lt. Gov. Dan Patrick called for Texas to reopen, saying, "lots of grandparents" were willing to die to save the economy. (Patrick came to prominence in Texas as a right wing radio host, where he famously had his own vasectomy performed live on air.) A month later he told his friends at Fox News that Texas should reopen its economy immediately. “There are more important things than living,” he said. Profits, per chance?
Gov. Abbott likes to present himself as more stately and measured, but ever careful not to offend the Texas GOP’s hardcore conservative base, he has twisted himself into knots in an effort to not be seen mandating changes in people’s behavior—lest he have to admit that government regulation could actually do good.
Texas was one of the first states to reopen. With a population of 29 million people, and the second largest economy in the country, the decision by Abbott to reopen put pressure on other governors to follow course. And this gave cover to Trump, who said,  “I rely on his [Abbott’s] judgment.”
Desperate for political cover, nervous Texas Republicans capitalized on the story of Dallas hair salon owner Shelley Luther, who refused to keep her salon closed and through cheers at a “Open Texas” rally in North Texas tore up a cease-and-desist letter issued to her by County officials to keep her salon closed.
Luther was briefly jailed and became a cause célèbre for right wingers. Right wing voices compared Luther to Rosa Parks. On the political left, her actions were seen as selfish for putting her community at risk of dying simply for trying to prove a point.
They highlighted the AstroTurf protests whose participants, some of whom were heavily armed, took pride in refusing to wear masks and chanted “Fire Fauci.” In Michigan the group leading the protests against Gov. Gretchen Whitmer (D) was funded by Education Secretary Betsy DeVos and her husband Dick.
The protests were promoted by, no other than Alex Jones, the Infowars conspiracy theorist and anti-mask zealot, who claims COVID-19 is a hoax—a hoax he invested in. The Food and Drug Administration CDC has warned Jones to stop selling silver-laced products as cures for a disease that apparently Jones believes is related to vampirism.
Left out of the debate in Texas has been the disproportionate impact on Black and Brown communities—where millions of Texans who don’t have the privilege or ability to work from home live. They include workers like 54 year old, single mother Maria Luisa Contreras, an essential frontline worker at a local grocery store in Bryan, Texas, who makes just $9.45 an hour. Contreras, a Type 2 Diabetic and sole provider for her family, fell sick last week with COVID-19, and now when—and if—she leaves the hospital she will leave with thousands of dollars in medical bills. Her eldest daughter Ariella Grandados told me, “It’s totally unfair that my mom had to work and doesn’t even have sick leave. I wish the politicians deciding everything had to do her job.”
I spent a better part of a decade organizing undocumented workers. They makeup 8% of the Texas workforce and have been left out of all state and national relief programs. Jose Martinez is a father and sole provider of three daughters who has lived and worked in Texas 30 years building homes in some of the most wealthy zip codes in the state. “I know it’s unsafe to go back to work,” he says. “But if I don’t work my family will be left with nothing. I don’t have the choice to stay home.”
In countries like Germany, workers aren’t being forced to make impossible choices. Instead they have payroll protection. Payroll protection provides businesses with forgivable loans to allow their workers to continue receiving their full wages. In Germany, of course, if a worker were to lose their job they would still have healthcare because their healthcare is a universal right. At worst, German workers are bored at home right now. At worst in the United States, many people like Jose Martinez have lost their jobs, lost their apartments, are barred from collecting unemployment, did not receive a stimulus check (despite having paid taxes), and can no longer provide for their families. The failed response of the Trump Administration has made the lived realities of American and German workers as different as night and day.
In Texas, GOP leaders like to talk about “freedom of choice” (though not of course not when it comes to women’s bodies), they mean the freedom of businesses to function unhindered by either government regulation or unions. Reopening was never about that freedom of choice. It was about the choice that reopening will force upon millions of Texans: Risk our health and life by going back to work, or risk losing unemployment benefits and becoming destitute.
In Texas, the GOP can no longer hide the fact that they are the party of Profit Over People.
Posted by Angela Valenzuela at 10:54 AM