Congressman John Lewis passed away from pancreatic cancer last night who, like Martin Luther King, Jr., anticipated the #BlackLivesMatter that we are witnessing today.  This morning on MSNBC, Joy Reid featured historian Jon Meacham, author of John Lewis' biography titled, His Truth Is Marching On: John Lewis and the Power of Hope.  I really liked Meacham's commentary on how John Lewis' "whole life was a sermon."

By this, he meant that while sermons and sermonizing are important, what should not get lost is the everyday embodiment of social justice values to which the Bible speaks. What his life also shows is that while demonstrating, protests, and marching for social change are necessary, they are not sufficient to achieve our goals.

To extend power, we must also be policy actors, meaning that we engage policy and politics in high-stakes, arenas like Congress, legislatures, school boards, state boards, county and local city councils, and the like. We can and should play a crucial role as researchers, policy analysts, and through our work at the grassroots level, we we can be an informed voice on directions for policy.

As we sit at home, many of us would do well to consider our next steps in the current trajectory for change. I encourage you to not only lend support to organizations that are embarked on progressive policies, but also join them and be a voice yourself for much-needed policy changes. Or if you already belong to an organization, consider how it might unite with other organizations as a coalition for change.  Even if you haven't been involved in these deep ways, that doesn't mean that you can't start today, by slowly and surely educating yourself on the work of organizations that are making a difference in government whether at the local, state, federal levels, or international levels.

As someone myself who teaches and works in policy across these arenas, I can attest to the artfulness involved in navigating in and across these systems of government as a researcher, activist, and community organizer. We are blessed to have been graced with the likes of John Lewis whose life is emblematic of the diverse sets of dispositions, knowledge, and skills that are requisite for us to be transformational agents of change.

Thank you John Lewis, for exemplifying both who and how we must become as policy actors and as good, decent people if we are to preserve our deepest, most-cherished values as Americans, including fair play, the rule of law, one person-one vote, unity in diversity, equality under the law, due process, and liberty and justice for all as the bedrock to a vibrant democracy that while currently under attack, is fully poised at the precipice of monumental change.

John Lewis’s Legacy and America’s Redemption
The civil-rights leader, who died Friday, acknowledged the darkest chapters of the country’s history, yet insisted that change was always possible. 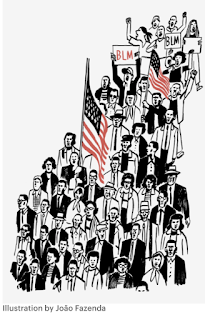 
John Robert Lewis was born in 1940 near the Black Belt town of Troy, Alabama. His parents were sharecroppers, and he grew up spending Sundays with a great-grandfather who was born into slavery, and hearing about the lynchings of Black men and women that were still a commonplace in the region. When Lewis was a few months old, the manager of a chicken farm named Jesse Thornton was lynched about twenty miles down the road, in the town of Luverne. His offense was referring to a police officer by his first name, not as “Mister.” A mob pursued Thornton, stoned and shot him, then dumped his body in a swamp; it was found, a week later, surrounded by vultures.
These stories, and the realities of Jim Crow-era segregation, prompted Lewis to become an American dissident. Steeped in the teachings of his church and the radio sermons of Martin Luther King, Jr., he left home for Nashville, to study theology and the tactics of nonviolent resistance. King teased him as “the boy from Troy,” the youngest face at the forefront of the movement. In a long career as an activist, Lewis was arrested forty-five times and beaten repeatedly by the police and by white supremacists, most famously in Selma, on March 7, 1965—Bloody Sunday—when he helped lead six hundred people marching for voting rights. After they had peacefully crossed a bridge, Alabama troopers attacked, using tear gas, clubs, and bullwhips. Within moments of their charge, Lewis lay unconscious, his skull fractured. He later said, “I thought I was going to die.”

Too often in this country, seeming progress is derailed, reversed, or overwhelmed. Bloody Sunday led directly to the passage of the Voting Rights Act––and yet suppressing the Black vote is a pillar of today’s Republican Party strategy. The election of the first African-American President was followed by a bigot running for election, and now reëlection, on a platform of racism and resentment. The murder of Jesse Thornton has its echoes in the murders of George Floyd, Breonna Taylor, and many others. Indeed, to this day, the bridge where Lewis nearly lost his life is named in honor of Edmund Pettus, a U.S. senator who was a Confederate officer and a Grand Dragon of the Alabama Ku Klux Klan.
And so there were times when Lewis, who died on Friday, at the age of eighty, might have felt the temptation at times to give up, to give way. But it was probably his most salient characteristic that he always refused despair; with open eyes, he acknowledged the darkest chapters of American history yet insisted that change was always possible. Recently, he took part in a Zoom town hall with Barack Obama and a group of activists, and told them that he had been inspired by the weeks of demonstrations for racial justice across the country. The protesters, he said, will “redeem the soul of America and move closer to a community at peace with itself.”
Dissent is an essential component of the American story and the American future. In that spirit, next week’s issue of The New Yorker will feature Profiles, reporting, essays, fiction, and poetry from the archives on this theme. Some of the figures written about here were dissenters in the public arena, like Dr. King, Margaret Fuller, and Cesar Chavez, who set out to battle the established order of racism, misogyny, and exploitation. Others were artists, like Langston Hughes and Toni Morrison, who provide the vision and the language to understand our predicament and, perhaps, to help transform it. And then there are those, like the scientist James Hansen, whose bravery is to insist on the validity of fact, when willful ignorance can lead to the catastrophic warming of the planet—or to the spread of a deadly virus. All of them persevered against countless obstacles even as they knew they might not live to see their most fundamental struggles concluded. ♦

Posted by Angela Valenzuela at 12:09 PM