Editorial: Leave politics out of reopening Texas schools. Listen to the science.

From the editors of the Houston Chronicle. -Angela

Editorial: Leave politics out of reopening Texas schools. Listen to the science. 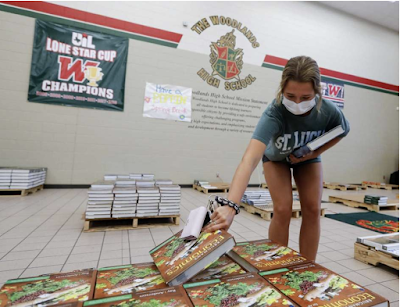 Kathryn McGhee places one of her books on a stack as she returns textbooks at The Woodlands High School, Friday, May 15, 2020, in The Woodlands.
Photo: Jason Fochtman, Houston Chronicle / Staff photographer

Update July 29, 7:18 p.m. This editorial has been updated to include a response by Texas Education Commissioner Mike Morath, who issued a statement late Wednesday.

The decisions to re-open Texas schools for in-person education should be made on the basis of sound public health considerations, not because of politics. And since health conditions vary widely across Texas, the biggest say in when students and teachers can safely meet again in the classrooms should belong to local, not state, officials.

Unfortunately, two decisions by state leaders in the past week risk getting all of that terribly wrong.

Starting a new school year amid an alarming surge of coronavirus cases is daunting enough. Now imagine worrying that campuses may be forced to reopen before it is safe.

At least a dozen local health authorities across Texas, including Harris County and Houston, have ordered public and non-religious private schools to delay in-person instruction because of COVID-19. Those orders are sound, based on medical evidence and close readings of local conditions.

Paxton is wrong to undermine them. And TEA is even worse by threatening schools with loss of funding.

Gov. Greg Abbott has repeatedly said in television interviews that local leaders would have the authority to decide when to reopen buildings, but didn’t clarify whether that includes health officials. His office did not respond to a request for comment.

School officials and families desperately trying to determine the best solutions for their districts and children need consistency, and maximum support. With the state trumpeting local control one day and grabbing hold of the reins the next, it just makes murky waters even murkier.

Enough with the game-playing. Too much is at stake.

“This political posturing is putting communities at risk,” state Rep. Gina Hinojosa told the editorial board.

She’s right. No one wants schools closed indefinitely. Children learn better through face-to-face instruction. Virtual learning likely exacerbates the opportunity gap between affluent and disadvantaged children, given how uneven access to the internet and other technology is among students.

But the coronavirus threatens the lives of students, their teachers and staff — and everyone they come into contact with. Texas has had almost 400,000 confirmed cases and nearly 6,000 deaths attributed to COVID-19. In the Houston region, there have been nearly 97,000 cases and 1,490 deaths.

Children are not immune. Since March, there have been about 2,000 cases of COVID-19 reported at licensed childcare operations in the state. Of those patients, 1,343 were adult staff members and 654 were children.

In Nueces County, officials say 85 infants under the age of 1 have tested positive for the coronavirus since March.

Morath, while stressing that changing conditions could warrant further tweaks to the TEA policy and that start dates remain at local district’s discretion, doubled down on the agency’s warning in a statement late Wednesday. Paxton, did not return requests for comment. They may be willing to overlook the risk to our children, but we should not.

“What we know for sure is that our schools and community are no safer today than they were at the beginning of this pandemic,” Harris County Judge Lina Hidalgo said in a statement. “Our actions to save lives from this crisis should be guided by public health, science, and compassion for the health and safety of our residents — not politics.”

The recent spikes in COVID-19 cases in Houston make it clear that conditions can change from one minute to the next. It’s possible that by early fall, conditions will have improved so much that schools could safely return to in-person instruction. But it’s also possible that they will have not improved, or perhaps gotten even worse.

If that’s the case, the last thing the state of Texas needs to be doing is making it harder for the health and school officials to make the right calls to protect everyone’s lives. Such blanket proclamations as the ones issued this week are misguided and extremely unhelpful.

Science should drive these decisions. Leave the politics out.

Posted by Angela Valenzuela at 9:33 PM