This is Slavery. How Trump is Helping Tycoons Exploit the Pandemic by Jane Mayer

This is outrageous and upsetting.  Give this a close read to learn about American slavery, as an African American woman interviewed for this story exclaimed. It's shocking and disgusting to read about how during a pandemic, Trump is loosening every regulation imaginable right now—from poultry and meat packing plants, to trucking companies and oil and gas pipelines. The New Yorker's focus here is on poultry companies who are hyper-exploiting their workers right now.

This is happening as their greedy corporate bosses are delivering between 2 and 3 million dollars to the Trump campaign. Get this. They are his biggest campaign contributors,

This is Coronoavirus, disaster capitalism, my friends, that is literally sacrificing, Latinos, African Americans, and Asian Americans to highly dangerous, toxic, prison-like, freezing working conditions in plants where production rates of Birds Per Minute—while standing next to COVID-infected employees in COVID-infected plants—reach ever-higher, plateaus.

It's terrifying to read that these companies have stopped generating official data for the public which, of course means, that the general public is also sacrificed and at risk.

Untold numbers are dying. This is inhumane. We need an abolitionist movement for what is happening in these industries hidden away from public view, reminiscent of Upton Sinclair's famous 1906 novel, The Jungle [free download available].


"The book so shocked Americans that President Theodore Roosevelt ordered an immediate investigation of slaughterhouses. The result was landmark consumer-protection legislation that formed the foundation of today’s Food and Drug Administration."

We need an FDR. We need consumer and worker protections all over again in this country. Here is one small, meaningful action we can all take today.  Please sign this petition—Poultry Companies: Give workers essential benefits and safe conditions during COVID19 where you can also make a contribution. National LULAC is also taking this on under the brilliant leadership of Domingo Garcia and Sindy Benavides.

This whole system needs to be upended. We need a national campaign to boycott any plant that treats its workers so horrifically.

Just the thought of chicken produced under these conditions makes my stomach churn anyway.

Aside from the general principle of the matter, it's for the good of everybody's health and welfare. You may want to go straight to the NY website, as I just did, to listen to the audio version of this story.  The narrator, presumably the author, Jane Mayer, does an excellent job. Hearing her tell the story made it even more impactful for me.  So impactful that I had to blog about this right away.


A Reporter at Large

How Trump Is Helping Tycoons Exploit the Pandemic

The secretive titan behind one of America’s largest poultry companies, who is also one of the President’s top donors, is ruthlessly leveraging the coronavirus crisis—and his vast fortune—to strip workers of protections.
By Jane Mayer
July 13, 2020

Ronald Cameron, the head of Mountaire, which critics call a “brutal” employer, is one of Trump’s top donors.Illustration by Cleon Peterson 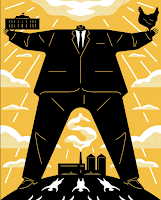 Posted by Angela Valenzuela at 1:43 PM