My grandmother was born on a farm near the Czech community of Tabor, South Dakota in 1924. She had 14 brothers and sisters. Czech was my grandmother’s first language. She did not learn English until she went to school at the age of six. Czech accented her English her entire life. At eleven years old, her father died in 1936 at the height of the Great Depression, leaving her, her mother, and siblings to manage the farm on their own in the middle of the Great Depression. They grew corn to feed the hogs they traded in town. They wore hand-me down clothes and shoes and bathed once a week in a large washtub on Saturday nights to be ready for church on Sundays. Community life centered around the Saint Wenceslaus Catholic Church.

The local farm kids were educated in the one-room schoolhouse. Entertainment came in the form of story-telling and the playing musical instruments. At the Beseda barn dances, the accordion and fiddle belted out Czech songs. Young and old alike filled up on potluck chicken and dumplings and a variety of kolaches. These celebrations of culture still take place in Tabor today: (Czech Days).

In those days, Americans lived a relatively isolated existence with limited social interaction. Agriculture in America sustained little towns from coast to coast. The “family farm” made this way of life possible. Rather than highways, America was connected through railroads that delivered agricultural products to markets across the country. In other words, Americans were naturally socially distant with most of the population living a rural existence.


When I was young, before grandma passed away, I remember grandma saying, “people today cannot do for themselves.” About the Great Depression Grandma would say “nobody had money, we didn’t know what money was. We produced everything we needed on the farm, and if we didn’t have it, we traded for it.”

I provide this context because it underscores a serious concern with the American economy. American capitalism commodifies our existence. Markets determine our worth, not us.

Communities in the 1930s were better equipped to endure a pandemic, even with limited healthcare, than they are today. People lived outside of farm communities. Traveling was a once or twice in a lifetime endeavor with most people living near the place they they were born. Neighbors helped each other because what was good for one member of the community was good for everyone in the community. Today, many of our community members refuse to wear a mask out of consideration even when it risks the lives of others. 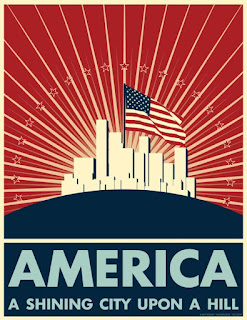 For all of the twisting and turning about “American exceptionalism” and “rugged individualism,” Americans in actuality have traded resourcefulness, self-reliance, and self-determination for the convenience of systems that provide for us. Like a helpless baby, we rely on the corporate oligarchy to determine and supply our needs.

This American submissiveness begs the question, how do we continue when our economic systems fail? Additionally, our systems fail often. In the last three decades, we have witnessed collapses in the banking and insurance industries, skyrocketing fuel costs, the implosion of the housing market, the failure of the American auto-industry, and the rescue of these institutions. The federal government's bail-outs of U.S. corporations guaranty the welfare of the oligarchy state at the tax-payer’s expense. 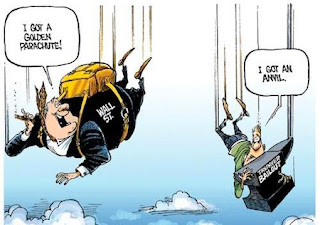 During this most recent pandemic bailout, the federal government’s response was to pass the Coronavirus Aid, Relief, and Economic Security (CARES) Act, an astronomical $2 billion relief bill that essentially provided a months’ worth of grocery money to families but $500 billion in corporate bailouts, among other industry bailouts (CARES Act).

Our leaders at the federal level have proven time and again that they are willing to underwrite all threats to oligarchy profit. The 2009 Obama Recovery Act was a paltry $831 billion by comparison.

Despite this, government cannot sustainably bailout industry in every scenario. If COVID19 continues to spread exponentially, we will suffer disaster. The reasons for this are because we live close together, we rely on employment that may or may not survive the era of COVID19. Our schools may not be able to open in August 2020, our hospitals may not be able to handle increasing numbers of hospitalizations. We may get sick ourselves or worse we may die or suffer irreparable organ damage. We must earn a living, but will the employment we rely on remain sustainable when COVID19 continues to plague us?

Many would argue that we must return to our "normal" immediately since we must make a living, but is this not wishful thinking if this plague infects us all? People from all races, classes, and ages are dying from COVID19.

Unlike in grandma’s day, we are not socially distant, and we are not economically independent. Rather than doing for ourselves, and living close to the Earth, we have become slaves to our employer and slaves to the service of our economy, neither of which can fail if we are to survive. We are in a lose-lose situation. We cannot live without livelihood, but we cannot work without risking death.

Some might respond that COVID19 is not that deadly, however most of us have quarantined for four months and still we have lost 133,000 Americans, and more than half a million people worldwide. These numbers will almost surely continue to rise with no end in sight with current behaviors (COVID19 Numbers). Imagine what the diagnosis and death rates would be if we were operating fully with schools open.

We cannot predict the future, but we can be assured that COVID19 will not be the first viral pandemic we face. It is time we look beyond our current social and economic systems. Like in my grandmother’s day, we must devise environmentally sustainable social and economic systems that account for each of us. Our existence and survival as human beings should not be determined by our personal market value, particularly in a market destabilized by a pandemic. As grandma suggests, we must create systems where we remain independent and resourceful without continued dependence on the corporate and government oligarchy to ensure our survival.