My husband, Emilio, and I went to vote today.  If you live in Austin or somewhere in Travis County, here is a list of early voting locations for the July 14, 2020 Joint Primary Election Runoff and Special Election. We must all get out to vote as part of the larger fight against fascism.
Great read from February 29, 2016 on where Europeans knew us to be headed.  We've all lived it, but not all have recognized it for what it is.  Read history.  Remember Mussolini. Remember Adolf Hitler.
As acknowledged in the opening sentence to this New York Times post by Roger Cohen, fascism is an ideology that is not of this land, not of this continent.
It is a foreign import that will die hard. But die, it must, for the sake of humanity and the planet.
Get out and vote like your life depends on it.
After all, it actually does.
-Angela Valenzuela 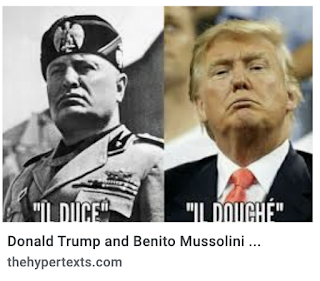 Europe, the soil on which Fascism took root, is watching the rise of Donald Trump with dismay. Contempt for the excesses of America is a European reflex, but when the United States seems tempted by a latter-day Mussolini, smugness in London, Paris and Berlin gives way to alarm. Europe knows that democracies can collapse.
It’s not just that Trump retweets to his six million followers a quote attributed to Mussolini: “It is better to live one day as a lion than 100 years as a sheep.” It’s not just that Trump refuses to condemn David Duke, the former grand wizard of the Ku Klux Klan, who has expressed support for him. It’s not just that violence is woven into Trump’s language as indelibly as the snarl woven into his features — the talk of shooting somebody or punching a protester in the face, the insulting of the disabled, the macho mockery of women, the anti-Muslim and anti-Mexican tirades. It’s not just that he could become Silvio Berlusconi with nukes.
It’s the echoes, now unmistakable, of times when the skies darkened. Europe knows how democracies collapse, after lost wars, in times of fear and anger and economic hardship, when the pouting demagogue appears with his pageantry and promises. America’s Weimar-lite democratic dysfunction is plain to see. A corrupted polity tends toward collapse.
Trump is telling people something is rotten in the state of America. The message resonates because the rot is there.

He has emerged from a political system corrupted by money, locked in an echo chamber of insults, reduced to the show business of an endless campaign, blocked by a kind of partisanship run amok that leads Republican members of Congress to declare they will not meet with President Obama’s eventual nominee for the Supreme Court, let alone listen to him or her. This is an outrage! The public interest has become less than an afterthought.
Enter the smart, savvy, scowling showman. He is self-financed and promises restored greatness. He has a bully’s instinct for the jugular and a sense of how sick an angry America is of politics as usual and political correctness. He hijacks a Republican Party that has paved the way for him with years of ranting, bigotry, bellicosity and what Robert Kagan, in The Washington Post, has rightly called “racially tinged derangement syndrome” with respect to President Obama.
Trump is a man repeatedly underestimated by the very elites who made Trumpism possible. He’s smarter than most of his belittlers, and quicker on his feet, which makes him only more dangerous.
He’s the anti-Obama, all theater where the president is all prudence, the mouth-that-spews to the presidential teleprompter, rage against reason, the backslapper against the maestro of aloofness, the rabble-rouser to the cerebral law professor, the deal maker to the diligent observer. If Obama in another life could have been a successful European social democrat, Trump is only and absolutely of America.
Part of the Trump danger is that he’s captured an American irredentism, a desire to reclaim something — power, confidence, rising incomes — that many people feel is lost. Trump is a late harvest of 9/11 and the fears that took hold that day. He’s the focus of vague hopes and dim resentments that have turned him into a savior in waiting. As with Ronald Reagan, it’s not the specifics with Trump, it’s a feeling, a vibration — and no matter how much he dissembles, reveals himself as a thug, traffics in contradictions, the raptness persists.
Europe is transfixed. The German newsweekly “Der Spiegel” has called Trump “the world’s most dangerous man” and even waxed nostalgic for President George W. Bush, which for a European publication is like suddenly discovering a soft spot for Dracula.
The French prime minister, Manuel Valls, has tweeted that Trump “fuels hatred.” In Britain, Prime Minister David Cameron has attacked Trump’s proposed ban on non-American Muslims entering the United States, and more than half a million people have signed a petition urging that he be kept out of Britain. This weekend Britain's Sunday Times ran a page-size photo of Trump in Lord Kitchener pose with a blaring headline: “America Wants Me.”
So do a few Europeans, among them the French rightist Jean-Marie Le Pen. Vladimir Putin, the Russian president, is a fan, as are some Russian oligarchs. Judge a man by the company he keeps.
This disoriented America just might want Trump — and that possibility should be taken very seriously, before it is too late, by every believer in American government of the people, by the people, for the people. The power of the Oval Office and the temperament of a bully make for an explosive combination, especially when he has shown contempt for the press, a taste for violence, a consistent inhumanity, a devouring ego and an above-the-law swagger.
As Europe knows, democracies do die. Often, they are the midwives of their own demise. Once lost, the cost of recovery is high.
A version of this article appears in print on March 1, 2016, Section A, Page 29 of the New York edition with the headline: Trump’s Il Duce Routine. Order Reprints | Today’s Paper | Subscribe
Posted by Angela Valenzuela at 8:17 PM