Equity in the midst of a pandemic.  May all of our institutions and budgets go this route.
A breath of fresh air, no less.
-Angela Valenzuela 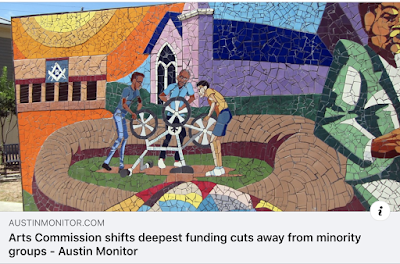 Racial minority groups will be spared the deepest cuts in Cultural Arts contract funding in the next budget, if the recent recommendation of the Arts Commission is supported by City Council.
On Friday the commission approved a funding matrix for the 2021 budget year that will see no percentage reductions to Black contractors and groups, and a 12 percent cut to Asian, Latino, African, and Native American categories commonly known as ALAANA groups. Contractors aligned with LGBTQA and disabled communities will see a 38 percent reduction and general contractors will receive a 58 percent funding cut.
Those reductions came about because the Covid-19 pandemic has severely reduced Hotel Occupancy Tax revenues that supply Cultural Arts funding. Total arts funding next year is expected to reach $7.2 million, a drastic cut from the $12.8 million planned for in the most recent budget.
About $400,000 of next year’s funding will go toward a $1.2 million deficit the city is covering in this year’s cultural contracts, which was also caused by the falloff in hotel tax money for this budget year.
The city emphasis on addressing equity issues facing minority groups was the main priority for the commission’s working group that began looking at the funding matrix in May. More than 120 scenarios worked with the limited funds to decide how to allocate them across different groups based on how much funding and other revenue they have available.
The commission’s final proposal to City Council eliminates a cultural marketing stipend of more than $300,000 to provide that funding directly to the racial minority categories.
“To me it is the most equitable choice that we have on the board,” Commissioner Bears Rebecca Fonte said. “It preserves us looking at all funding through the racial equity lens but it also protects small organizations that are less able to weather deep cuts.”
During public comment before the start of the meeting, leaders from arts organizations spoke for and against the equity approach, with some long-established groups arguing their venue costs and other overhead will put them at risk of closure if their funding is drastically cut.
Commissioner Michelle Polgar said the alarming number of arts venue closures in recent years could worsen.
“I would caution against making any assumptions about the stability or ability to weather based on an arbitrary budget number,” she said. “We heard from Tapestry, we heard from Vortex today … these are organizations that are trying to maintain venues and we have been fighting to try to maintain venues. We lost five significant venues in this community in two years, so I would be cautious about that.”
Bonnie Cullum, co-founder of the Vortex, said the funding cut and the uncertainty brought on by the pandemic could put the theater at risk.
“I do not want the Vortex to be penalized for its achievement. We’ve struggled for 30 years to get to where we are now,” she said. “If I were a nimble young theater artist with no venue or overhead I would take my 58 percent cut and I would make some really interesting theater in a park with low production values and pay the artists. But some of us have venues that are sitting empty and are not likely to be filled with theater again until when? We have no idea when we will be able to safely have the communal experience again.”
Cynthia Pérez, co-owner of the La Peña arts space, said the shift toward equity in arts funding is overdue.
“I wanted to express support for your commission to take the historic step of pushing through the normalizing of equity. Why? Because it’s never going to be a good time to do it … because historically you’ve already left out all these people of color organizations,” she said. “Now we’re at the historic cross point and I want to encourage you to do the historic thing and support us as ALAANA members.”
Photo made available through a Creative Commons license.
The Austin Monitor’s work is made possible by donations from the community. Though our reporting covers donors from time to time, we are careful to keep business and editorial efforts separate while maintaining transparency. A complete list of donors is available here, and our code of ethics is explained here.
‹ Return to Today's Headlines
Posted by Angela Valenzuela at 11:40 AM