A moral crisis grips the US border. Yet the religious right is shamefully silent

I shudder as I read this piece by Marilynne Robinson published in The Guardian.  She aptly characterizes religion as profoundly caught up with partisanship politics—even to the point of taking a blind eye to the otherwise obvious cruelty of U.S. border policy that involves the ripping away of children from their parents' bodies if they cross the U.S.-Mexico border and attempt to seek asylum or try to enter the country without papers.

Christianity that has spread through the culture on the strength of the old American habit of church-going, and which propounds a stark vision, the embattled faction of “the saved” surrounded by continuous threats to their souls – otherwise known as the American population at large.

This is a very arrogant and destructive kind of Christianity that needs to open its eyes to its own interest in preserving existing hierarchies of privilege and power even if at the expense of their own humanity as so-called Christians.

While this may get rationalized by some on the right as "nation building" or "making America great," this is nothing short of a pact with the devil that magically and mysteriously never presents itself lucidly in this way.

Given that the devil is the master of deception, masquerading as an angel of light, what may seem righteous and good is actually woefully and horribly wrong. Take it from the Bible itself in 2 Corinthians, chapter 11, verses 13-15 as follows:


13For such men are false apostles, deceitful workers, masquerading as apostles of Christ. 14And no wonder, for Satan himself masquerades as an angel of light. 15It is not surprising, then, if his servants masquerade as servants of righteousness. Their end will correspond to their actions.


Nothing good, my friends, can possibly come out of a policy that brutally tears families apart—either for us as a country or those who are directly affected.

Speak up, everybody!  Get woke!  Do something!  Call all of those that represent you and speak against this tragedy that is already of unspeakable proportions.

We are truly in the grips of a profound, moral crisis to which we are all obliged to respond if we ourselves, by our silence or inaction, are not to be complicit.

And for Christians, please don't let your brand of Christianity fall prey to the lies and distortions of the evil one.  And let's all disavow policies that would make Jesus cry.

A moral crisis grips the US border. Yet the religious right is shamefully silent

Marilynne RobinsonThe Christian right is allowing Trump to escape responsibility for the immoral policy of separating children from their parents. Have they no shame? 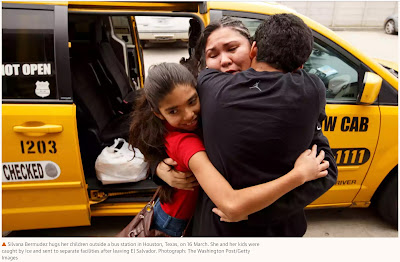 As a matter of recent policy, agents of the American government take children from their parents’ arms at our southern border. They are kept at separate facilities for indeterminate periods of time. The parents are jailed and the children are put in the care of non-governmental agencies, sometimes in other states. It is hard to imagine that the higher rate of incarceration and the new system of calculated injury to children would not soon overwhelm existing arrangements no matter how many shelters and beds are provided for a frightened, heartbroken population of the very young, whose miseries are intended as a disincentive to future potential border-crossers.
The only nod to shared humanity in this policy is an obvious understanding that a child’s grief is a particularly wrenching experience for a parent, powerful enough – so the designers of the policy clearly believe – to weigh against the threats to that same child’s safety and health and prospects for a better life that bring parents and children to the American border. This effect would be much heightened by any parent’s knowing that the one sufficient comfort for any child in almost all circumstances, and especially one like this, is to be taken into his mother’s or his father’s arms.
I am sure that, among these non-governmental caregivers, good-hearted people can be found at more or less the same rate as in the general population. But the policy in question is new, and the demands it entails are special and grave. The child grief they try to deal with must include mourning, feelings of abandonment, a kind of visceral knowledge of loss that can be quieted sometimes but never dispelled. Especially in the case of the small children, their parents’ arms would have been home and comfort through the whole length of their journey to our border. 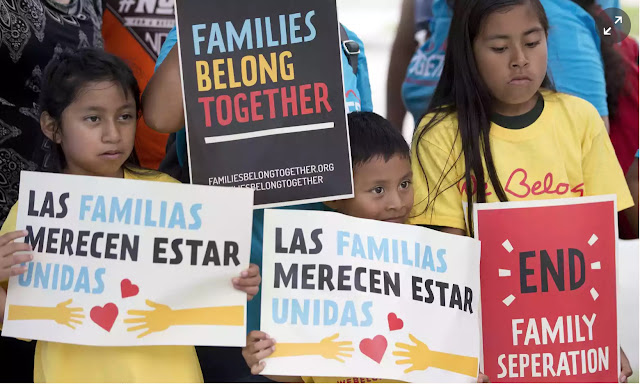 What have we become? America is not alone in struggling with the flow of refugees from actual and virtual wars. Desperation and destitution obscure the dignity and worthiness of people when they are dealt with in such numbers. Given the will, some can see them as alien in the most negative sense, and threatening. Nothing is excused by the fact that this is predictable, perhaps inevitable.
But there is nothing inevitable about this recent change in American policy, this “zero tolerance” that separates families by jailing all adults who try to enter the country illegally, as well as some of those who come seeking asylum. Donald Trump, who has called the policy a “horrible law”, though his own administration put it in place, pretends that the Democrats must be forced to change it, when the Democrats are very much out of power, and when he could reverse the policy as readily as it was put in place. By speaking as if it were a political issue he suggests stalemate, deadlock, precluding any thought that the policy will be changed.
It should be obvious that without politics there can be no such thing as representative government, and equally obvious that politics as now understood and practiced is a great threat to our democracy. Partisanship has hardened into empowered irrationality. I read from time to time that liberals are offensively self-righteous, perhaps because we say this kind of thing: people on the right are so utterly certain they own the moral high ground that for them Trump’s lie can have the ring of truth. After all, who but Democrats would do something so patently horrible? Sometimes at least Trump does find just the right word.

Partisanship has hardened into empowered irrationality

Party identification at present aligns with important asymmetries in the American population. Relatively speaking, it is Republicans who own guns, who claim to be religious, who resent immigration. This list only hints at the profound differences of worldview that lie behind these partisan divides. There is a generalized fearfulness on the right that makes many people feel they need guns. Their fears are stoked when they are told that immigrants are criminals, rapists and animals. Behind much of this is a spurious Christianity that has spread through the culture on the strength of the old American habit of church-going, and which propounds a stark vision, the embattled faction of “the saved” surrounded by continuous threats to their souls – otherwise known as the American population at large.

'We live as second-class citizens': what it's like to face border agents every day

Read more
Insinuating an element of demonism into the interpretation of ordinary life justifies the word and the concept “horrible”, and retaliation in kind, whence all those guns. We have patriots who hate the country, Christians who insult and deprive the poor and the stranger. We have a president who, with the decisive support of self-declared conservativeness, acts with contempt for law and custom, and for decency. He has a degree of latitude, where his base is concerned, that is incomprehensible to those whose mental landscape is not demon-haunted. His moral shabbiness is a minor thing, they say, over against the forces of evil that assail him.
Advertisement
Can a movement that defines itself by its vehement rejection of American culture ever really wish or work for civility and accommodation? Might not such a movement resist solutions to social problems, for example gun violence and poverty, because these things confirm a view of the culture that is central to their rejection of it? Do they place any value on America’s good name? Questions like these arise from the social and political consequences of the years in power of the so-called Christian right. They are uniquely Trump’s prop and stay. Will they let him escape his responsibility for a policy that even he denounces in moral terms, and allow him to keep it in place? The question cannot be avoided – have they no shame?
Posted by Angela Valenzuela at 10:39 AM