If only Texas School Board members could themselves take a course in Mexican American Studies to dispel their fears, that would be helpful.  In the meantime, the SBOE needs to trust all 40 or so that testified in favor of the name change.
They vote on this today and again on Friday.

I hope we're not having to return again at the September meeting of the State Board of Education to advocate for the change. I want to be hopeful...

Republican State Board of Education member David Bradley proposed the new course title in April, saying he found "hyphenated Americanism to be divisive.” On Tuesday, another board member, Democrat Ruben Cortez, called Bradley “the most mean-spirited” person on the board.
BY DAVID YAFFE-BELLANY JUNE 12, 2018 19 HOURS AGO 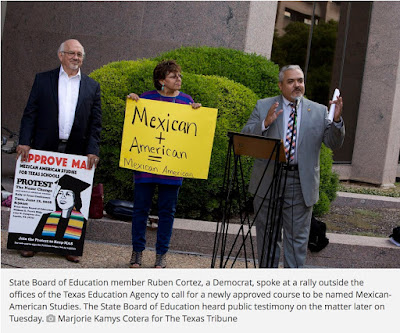 Texas activists pushing for a high school course on Mexican-American history won a hard-fought victory in April, when the State Board of Education voted to create the class.
But that victory was bittersweet, as Republicans and one Democrat on the 15-member board voted to name the course “Ethnic Studies: An Overview of Americans of Mexican Descent” rather than “Mexican-American Studies,” the title that advocates for the class favored.
On Tuesday, a long line of Mexican-American activists and educators from across the state testified at a hearing in front of the board, calling for members to change the course's title to Mexican-American studies. As each person testified, dozens of supporters sitting in the audience waved their hands in a silent show of approval.
“Names are important. They have an impact on students in numerous ways,” Elizabeth Santos, a trustee on the Houston ISD school board, said in her testimony. “Our children cannot help but be aware of who they are. This style of naming minimizes the role distinct identities and backgrounds play in shaping the diversity that is such an advantage for our state.”
The board was gathered in the William B. Travis Building in Austin ostensibly to hear public input on proposed curriculum standards for the course, modeled on a Mexican-American studies class that Houston ISD began teaching in 2015. But at Tuesday’s hearing, those standards were mostly an afterthought, as the speakers railed against the board’s decision to rename the course. The board could vote on whether to change the course title as early as Wednesday, when it reconvenes to discuss the curriculum standards.
Donna Bahorich, a Houston Republican who chairs the board, pressed on the educators’ testimony, asking whether someone with Mexican ancestors who identifies as Latino or Chicano would feel comfortable with a course titled Mexican-American studies.
“Why is saying ‘Mexican heritage,’ when there are different ways of referring to yourself, why is that not appropriate?” she asked Santos and other representatives of Houston ISD. “I’m a 60-year-old white woman. I don’t understand how this world works.”
At a protest outside the Travis Building on Tuesday morning, local activists and Democratic school board members argued that the new course title represents an assault on their ethnic identity.
“I can tell you that April meeting was one of the hardest meetings I’ve had to attend,” Ruben Cortez Jr., a Democrat who represents Brownsville on the board, said at the protest. “This is nothing more than discrimination.”
Beaumont Republican David Bradley proposed the course title in April, saying he found "hyphenated Americanism to be divisive.” That claim drew the ire of Democrats on the board and advocates for the course: At the protest, Cortez called Bradley “the most mean-spirited” member of the board.
Bradley missed Tuesday’s hearing because, he said, he did not want to skip a full week of work. But he responded to Cortez’s criticism in an email, saying he has become “impatient with a board member, who after 4 years, is generally unprepared to debate issues and has yet to master even basic parliamentary skills.”
“Everyones [sic] initiative was to find a compromise that got the course passed,” Bradley wrote. “Mr. Cortez should learn to say Thank You.”
A Democratic board member, Georgina Pérez of El Paso, also voted for the ethnic studies title in a deal with Republicans to secure approval for the course. "I've personally invested years of effort into getting this course into classrooms,” she told The Texas Tribune after the April vote. “It has meant a great deal to me. That is why it was important for me to ensure that it was going to pass.”
Texas education activists have demanded an official Mexican-American studies course for years. In 2014, the board rejected a proposal to create the course on the grounds that it would be racially divisive.
The proposed curriculum standards — which would set uniform guidelines for any school district in the state that wants to offer the course — call for students taking the class to develop a grasp of the major events that have shaped the Mexican-American experience, with an emphasis on 20th- and 21st-century history, including the immigration enforcement initiative Operation Wetback and the activism of Cesar Chavez.
Juan Carmona, who testified at the hearing and teaches a Mexican-American studies course at Donna ISD, told the Tribune he was broadly satisfied with the proposed curricular standards, although he still sees gaps, especially in the area of indigenous and Native American history.
“The fact that it exists is a good thing. The fact that they’re looking at standards for it is a good thing,” he said. “Does it need some extra work? Yes.”
Also on Tuesday, the school board heard public testimony on possible adjustments to the social studies standards adopted in 2010 — a set of guidelines that critics deride as “a triumph of ideology over facts.”
As currently written, the standards downplay the role of slavery in the Civil War and require students to study Confederate President Jefferson Davis’ inaugural address. Several people who testified at the meeting called on the board to remove language from the standards that identifies “states’ rights” and “sectionalism” as causes of the Civil War.
“We are in a national moment where we’re correcting history on this score, all around the country, even in Texas,” said Ryan Valentine, deputy director of the Texas Freedom Network, in his testimony. “The board has an opportunity to join that righteous cause and make sure that history in our classrooms in Texas is truthful and honest and accurate.”
The board is scheduled to discuss the social studies standards at the meeting on Wednesday. A final vote on the proposed adjustments to the standards will take place in November, according to Debbie Ratcliffe, spokeswoman for the State Board of Education.
Aliyya Swaby contributed reporting.

Posted by Angela Valenzuela at 11:07 AM