'Mexican-American' Is More Than A Name, It's A 'Narrative of Texas History,' Professor Says

Dr. Calderón does a great job in getting at the crux of the matter behind why our community is strongly supportive of this direction in policy—and why all of Texas and the nation should care.

For the record, according to Pew Hispanic, within the aggregate "Latino/a" community in Texas, Mexican Americans are by far the largest sub-group at 87 percent.  Latino/as, as a whole, also represent a rising share of the entire U.S. population (Pew Hispanic, Sept. 18, 2017).


Hence, a systemic omission from the grand narrative brings to mind this aphorism that is important to historians:

"Until the story of the hunt is told by the lion, the tale of the hunt will always glorify the hunter."

MAS thus offers an important corrective to the dominant Anglo narrative that noticeably marginalizes a large and growing demographic with roots to this continent.

I'll close with a common refrain expressed and heard in our community:

Here we are, and we're not going anywhere.

This is not a threat, but an observation.  Texas and the U.S. Southwest is Mexican Americans' ancestral homeland for tens of thousands of years.

And we're all the better for knowing this history anyway as it informs the direction that our community, and Texas as a whole, should take.

'Mexican-American' Is More Than A Name, It's A 'Narrative of Texas History,' Professor Says 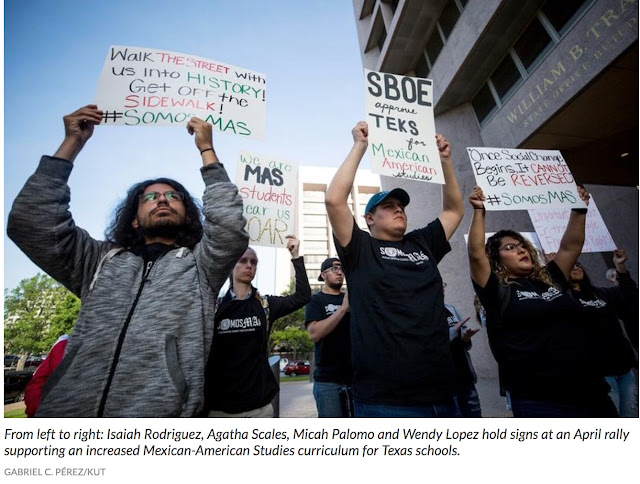 The State Board of Education will take a final vote Friday on what will be the first state-approved course on Mexican-American history in Texas public schools.
After weeks of debate about what to name the course, a compromise emerged this week: "Ethnic Studies: Mexican American Studies." The board initially voted to call the class "Ethnic Studies: An Overview of Americans of Mexican Descent" after a Republican board member said he didn't like "hyphenated Americanism."
Roberto Calderon, an associate history professor at the University of North Texas in Denton, was among those who went to Austin this week to plead for a name change.
In our Friday Conversation, Calderon told KERA's Rick Holter like many of his students, he didn't learn about Mexican-American history until he was in college.
Listen
Listening...
4:45
The KERA Friday Conversation.
Interview Highlights: Roberto Calderon
On the students who take his classes on Mexican-American history:
"This generation of students have never formally learned the history of Mexico. We totally ignore and rob them of the opportunity of knowing and putting themselves in a global context. By the time many of these students are coming to these courses, they're coming to us as juniors and seniors. This may be the only course they get to take that gives them the opportunity to learn more. They're saying, 'Why didn't I learn this before?' "
On the version of Texas history currently taught in public schools:
"Simply, it's one of silence and deletion, of minimizing an diminishing the Mexican story and Mexican history. It's important to know that the first European language spoken in what is now Texas was Spanish; it was not English. Mexican history is also indigenous history because Mexicans are a mestizo people. That component of Mexican history gets diminished even more. We will get the English colonial history one way or another in our public schools, but we won't get the other colonial history, like Spanish and eventually Mexican colonial history."
On what people should understand about the debate on Mexican-American studies:
"Mexican-American history is a history that's always been here and will always be here as long as there is a 'here' to speak of. While some people may not like that or feel uncomfortable with that, that's part of the story. Mexican-American history is a dominant narrative of Texas history. We can choose to ignore that fact or we can choose to include it, and I firmly believe [we should include it.]"
This interview has been lightly edited for length and clarity.
Posted by Angela Valenzuela at 1:56 PM