I agree, Jim Estrada.  It simply makes economic sense.  I think that we shall soon see generations of Anglo youth wanting to get into these courses because they will find them to be conceptually more helpful and compelling than much of what they are expected to take in school today—and the same with all the other Ethnic Studies courses, too, for which we advocated and that got approved at the April 11, 2018 meeting of the SBOE.

Plus, unlike any previous generation, our youth have access to Internet sources, including Wikipedia, Amazon, Google Scholar, and simple Google searches that are already letting them know that they're getting spoon fed a curriculum that is calcified and incomplete, at best, and narrow and culturally chauvinist, at worst.

Whenever my students at UT take our courses, they always say, "Why wasn't I taught this earlier?"  "Why did I have to come to college to learn this when I could have learned this in elementary, middle, or high school?" "I would have been a better teacher had I had access to this knowledge before becoming a teacher."

This last comment always makes me cringe a little—even as it points to an underlying implicit bias that helps explain the lion's share of underachievement that plagues minoritized youth.  Of course, it's not our students' fault, Anglo or non-Anglo.  After all, one isn't born knowing Ethnic Studies.  It actually has to get taught and learned.  I'm nevertheless happy for their honesty and many of them do go on to be the additive, culturally sustaining, community-oriented, intersectional, social justice, critical teachers that we need.

It's not a pill that you take to become one of these kinds of teachers, but rather a curriculum and a deep and defining engagement with it that lasts a lifetime.

In Texas and literally throughout the country, the K-12 curriculum is miles away from being anywhere close to systematically capturing the frameworks, major themes, pedagogical approaches, aesthetics, epistemologies, stories and histories of Mexican Americans, African Americans, Asian Americans, Native Americans, or women, but progress is finally palpable and real.

Someday, all of this Ethnic Studies stuff—if done well—will simply be called "a good education."  If not in my lifetime, then in yours—and for that, we shall all be better.


By Jim Estrada - Special to the American-Statesman
0 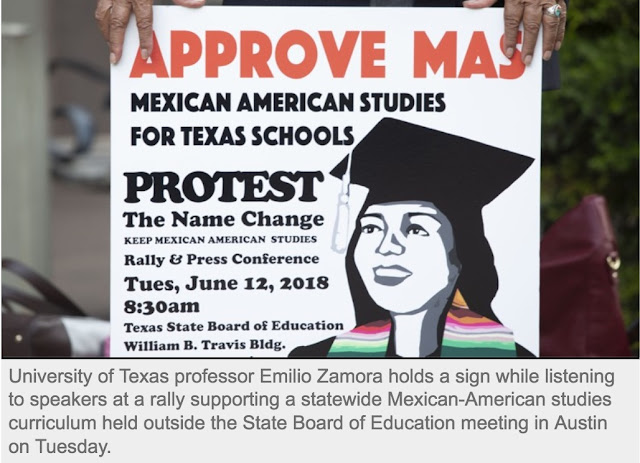 Our nation is undergoing a cultural evolution as a result of a non-European white, ethnic population explosion. According to the U.S. Census Bureau, in 2017 Hispanics, Latinos, and mestizos had grown to over 55 million — larger than Canada’s estimated 35 million total population — and are projected to reach 119 million by 2060. Much of this growth will continue to come from natural childbirths among U.S. citizens, not from immigration, as many in the U.S. have been led to believe.
But what else do we not know about our nation’s largest and fastest-growing ethnic neighbors? We have a substantial information gap in the educational curricula regarding our nation’s largest ethnic minority population. Insights into their history and contributions to our nation can lead to a better understanding of the influence of these fast-growing consumers, K-12 students, voters, workforce participants, and taxpayers. Addressing the gaps also represents economic, social and political opportunities.
RELATED: Texas panel tentatively OKs using ‘Mexican-American’ in course title.
The Selig Center at the University of Georgia found consumer spending among Latinos increased appreciably and has grown at a faster rate than that of the overall U.S. population. Hispanic buying power grew from $489 billion in 2000 to $978 billion in 2009 and topped over $1.5 trillion by 2015 — the latter representing an amount that would rank it among the top-10 economies of the world,
To effectively interact with such a diverse and rapidly growing ethnic population, mainstream society must become better informed of their histories, cultures, and contributions to our country. In response to increasing competition for the eyes and ears of a diverse marketplace, public and corporate social responsibility efforts are discovering that cultural relevance works — and that it improves their bottom lines.
Questions many non-Spanish speaking professionals and managers may ask about their current companies or organizations are: 1) “Do we possess the necessary insights to effectively attract the growing consumer power of growing ethnic audiences?” and 2) “Is the traditional white-Eurocentric one-culture-fits-all approach to marketing and social responsibility still sustainable?”
COMMENTARY: Texas should be learning about Mexican-American culture.
If the answer is no, then the next question should be: “Are educational systems, companies, public and nonprofit organizations prepared to collaborate to prepare today’s students in becoming culturally competent in addressing the USA’s changing demographic audiences?” There are many thoughts on how to reach cultural awareness, relevance and competence; the obvious place to start is with our educational systems that are charged with expanding the knowledge required to better understand and address society’s future needs.
The most successful corporate and non-profit organizations are already recruiting culturally aware individuals and creating diverse staffs that understand the changing population. These private and public sector leaders are hiring individuals who possess the cultural experiences related to targeted ethnic consumers—and the rudimentary skills to implement outreach initiatives to inform audiences of their brands and services. Like other key areas of professional expertise, cultural competence ensures market share increases, profitability, and sustainability in increasingly competitive marketplaces.
OPINION: How SBOE could advance plan for Mexican-American studies.
Ethnic studies are important to the fast-growing, nonwhite segments of our nation’s population for a variety of reasons; but from a strictly economic perspective, this knowledge should be of equal importance to non-minority professionals who do not recognize that cultural diversity is already affecting their current careers, upward mobility, and increased revenue streams.
Our nation’s educational institutions, businesses, nonprofits and public officials must address this critical need for preparing tomorrow’s culturally relevant workforce, for especially in the marketplace “adapt or perish” remains nature’s inexorable imperative.
Estrada, who lives in Austin, is author of “The ABCs and Ñ of America’s Cultural Evolution.”
Posted by Angela Valenzuela at 1:58 PM