Here is another news item published by Julie Chang in today's Austin American-Statesman regarding the name change to the course that we have been advocating now for some time.  Names do matter.  Rather than cultural erasure which is what the SBOE's name for us is about ("Ethnic Studies: An Overview of Americans of Mexican Descent").  Around 40 people testified yesterday and not a single person spoke for the name; all were against.
All of this follows, of course, after our multi-sited statewide press conference that took place on Wednesday, May 30, 2018.
I would think that the board would want to get us off their backs and just change the name.  After all, we have a lot of momentum and we meet regularly to discuss strategies and next steps—and not solely with respect to what SBOE board members are up to, but to actually address Mexican American Studies curriculum which is in great demand.  Here is our MAS clearinghouse website: https://mastxeducation.com/
Plus, it's costing taxpayers a lot of money for the SBOE's agenda to get squeezed on the relatively few days that they meet annually because of the numbers, passion, and unrelenting commitment by our community to this legacy project to bring MAS to the public schools throughout the state of Texas only grows with new voices because of our dogged determination.
As SBOE member, Ruben Cortez, expresses below this move by the board to name us "Ethnic Studies: An Overview of Americans of Mexican Descent" smacks of discrimination.
Note: We've already won for Texas public schools African American Studies, Latino Studies, Asian American and Pacific Islander Studies, and Native American Studies.  At issue is that we as Mexican American scholars, students, and community haven't won for ourselves "Mexican American Studies," a respected field of study in the academy.
I myself am a Mexican American Studies scholar.
Angela Valenzuela
#NoToAmericansOfMexicanDescent #ApproveMAS
Exact name of new course causes stir
At issue is putting ‘Mexican-American’ in course name. 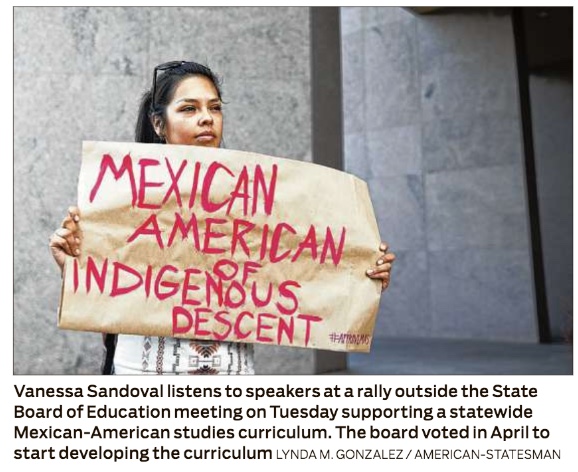 NEW DETAILS MEXICAN-AMERICAN STUDIES
Dozens of scholars and activists called Tuesday on the State Board of Education to change the name of a new statewide Me xi can-American studies course to include the term "Me xi can-American."
The Republican-led board voted in April to start developing the curriculum for a high school social studies elective course called "Ethnic Studies: An Over view of Americans of Mexican Descent. " Me xi can-American activists applauded the development of the course, but they decried the name, saying it did not accurately represent Me xi can-American identity and does not reflect an established area of study. 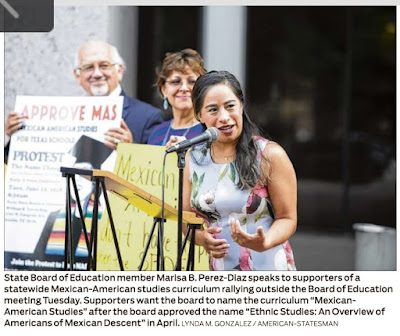 The proposed name is "going to be received as an indignity ... because it implies that somehow being Mexican-American is a threat to the notion of being American.
An ethnic identity should not be a test of what it means to be American," Houston school district educator Doug las Torres-Edwards told the board. Tor res-Edwards wrote that district's Me xi can-American studies curriculum on which the statewide course will be based.
Board member Rub en Cortez, D-Brownsville, said he has proposed changing the name of the course to "Mexican-American Studies. " The board is slated to take a preliminary vote Wednesday on the course name and curriculum.
Cortez said during a rally before Tuesday's board meeting that the name approved by the board in April was discriminatory, calling board member David Bradley, R-Beaumont, who proposed the name, "mean-spirited."
Brad ley, who was absent Tuesday, had said at the April meeting that he didn't want the name "Mexican-American Studies" to promote divisiveness.
Board member Barbara Cargill, R-Conroe, echoed Bradley's concerns.
"From some of our constituents, we're hearing concerns ... that not calling them Americans is going to be divisive for our students. The whole purpose of coming up with a different name was to address those concerns.
There was no intent to take away identity, cause anger or demean anyone," Car gill told the American-Statesman.
Tor res-Edwards offered to help write into the curriculum that American values would be upheld in the course.
Car gill said those extra steps "would go a long way," but she wasn't ready to support naming the course "Mexican-American Studies."
Board member Ken Mercer, R-San Antonio, told the Statesman he wanted to ensure that a course would be available to all His panic students, not just Mexican-Americans but that he was leaning toward calling the course "Mexican-American Studies."
Board member Pat Hardy, R-Fort Worth, said she was still undecided about the course name.
"The fact that people have an emotional attachment to the name, it means a lot, and 83 percent of Latinos in the state identify as Mexican-Americans so I'm feeling more and more comfortable about it," Hardy said.
At least three Republicans and all five Democrats on the 15-member board would have to join forces for the name "Mexican-American Studies" to have a chance at passing.
If the board approves the curriculum for the course this week, the board must take a final vote in September.
The earliest the course could be offered is in the 2019-20 school year.
Contact Julie Chang at 512-912-2565.
Twitter: @juliechang1
Posted by Angela Valenzuela at 1:35 PM