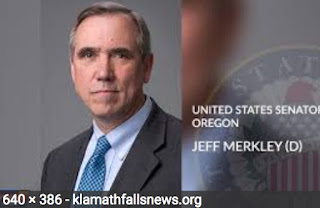 It's such a shame that neither of our two Senators—neither Cornyn nor Cruz—are leading on this in our own state of Texas.

This speaks volumes, doesn't it?

Don't we all believe that our country should never intentionally traumatize children? It is so disappointing and disgusting that this should be otherwise.

We must get these folks—all of them, with blood on their hands—out of office.  In the meantime, consider making a contribution to moveon.org

I'm U.S. Senator Jeff Merkley, and I believe that in America, we must never intentionally inflict trauma on children.
And that's why I'm writing to you today.
At a Border Patrol processing center in McAllen, TX, I witnessed something that is now seared into my mind: A large warehouse facility with cells constructed of fence posts and chain link fencing—like dog kennels or large cages.
But the style of construction isn't the issue. What is the issue is that in that facility U.S. agents are tasked with taking the children out of their parents' arms and putting them into cells with other children—with neither the children nor the parents knowing if they will ever see each other again.
Imagine a family that is persecuted abroad for its religion or political engagement, or a family targeted by a vicious drug gang. The family escapes to the United States, surviving harrowing experiences en route. Finally, they arrive to the shores of the United States, knowing that the U.S. has time and again treated families fleeing persecution with respect because so many Americans have a parent, grandparent, or ancestor that arrived to the U.S. fleeing persecution.
But instead, the Border Patrol—under a new plan concocted by Jeff Sessions, Donald Trump, and John Kelly—arrest the asylum seekers as criminals and proceed to take the screaming children from the arms of their protesting parents.
Let me state the obvious: This is wrong. Terribly wrong. Ripping the children away from their parents induces enormous anxiety for the parents. Where are their children going? Will they ever see them again? Who will care for them?
But even worse, this inflicts enormous trauma on the children. In a strange new land with a new language, the only security the children have is to be with their parents. Experts tell us (not that we need experts to tell us) that this is causing huge emotional trauma.
Harming children for any reason, including for the purpose of discouraging persecuted families from seeking asylum, is evil.

If you believe that separating children from their families is wrong—and that it's got to stop—then will you click here and chip in $5 a month to MoveOn to help fuel their campaign against this moral outrage, and to build the political power to stop this and other horrific policies targeting immigrant families?
(The best way to help MoveOn remain strong and able to fight back against this policy and other attacks on immigrant families is to click here now and become a committed monthly donor. That'll help MoveOn fight for as long as it takes, and work to take back power in Congress this fall, giving us more tools to stop Trump's worst abuses. But even if you can't chip in monthly, then please click here right now, because MoveOn needs your help to campaign against this moral outrage.)

Like you, I thought that this couldn't possibly happen in today's America.
But there I was in Texas, looking at a cell full of young boys. The youngest was knee-high to a grasshopper—maybe 4 or 5 years old. Some of those boys may have arrived as unaccompanied minors. But some had been taken away from their parents the previous day or perhaps only hours earlier. And the same happens with the daughters.
The Department of Homeland Security reports that in just a 12-day period in May they took 658 children away from their families.1
Where do they go? The Border Patrol turns them over to the Department of Health and Human Services' Office of Refugee Resettlement. Many end up in a massive detention center. I visited one located in a former Walmart, in another town in Texas. I wasn't allowed inside to check on the children—Team Trump requires that members of Congress submit a request two weeks in advance and doesn't guarantee that a visit will be approved even then. This is clearly designed to make it very difficult for Congress to exercise any oversight.
Nor would the supervisor at the detention center answer any questions, when he came out to talk to me. So I don't know how many children were inside, although I heard from others that the number was many hundreds, and possibly a thousand. I don't know how long they've been or will stay there, or where they'll go next. I don't know whether they have enough counselors, or teachers, or health professionals. I don't know if parents can regularly talk to their children, but I'm told by others that it is extremely difficult for parents to find out where their children are, let alone talk to them regularly.
But let's be clear. No matter how good the supplies and staff are—and I have heard that the nonprofit that runs the detention center has a solid reputation—nothing makes it OK to inflict great harm on children by unnecessarily and forcibly removing them from their parents, as they await an asylum hearing.

So we need you to fight back.


MoveOn has been fighting Trump's horrific anti-immigrant policies every day since he took office, and they will continue to fight every day until a new Congress—and a new president—puts a stop to these policies once and for all.

Please click here and chip in $5 a month to help MoveOn organize and drive grassroots energy to end this moral outrage—this immoral treatment of children— and to win back political power, so we can stop these despicable actions once and for all.

I will do everything I can to fight for these children. I'm shining a spotlight on this moral outrage and demanding that this immoral treatment of children stop immediately. But we need a spotlight so powerful, so bright, that Team Trump is compelled to respond. That requires every one of us.
MoveOn and its members have already been a powerful force in that effort. Please continue to sign petitions, share news stories with friends, and besiege your legislators with calls. I hope that by using the power of the media, grassroots activism, and public shaming, we'll make the Trump administration feel enough common decency and humanity to stop this vile, horrific detention policy right away.
But that alone may not be enough. Which is why this is a long-term fight. And why we must take back Congress, so that we have the political power to stop it, as well as to stop every other horrific policy the Trumpians dream up.

Will you help MoveOn organize and drive grassroots energy to end this moral outrage—this immoral treatment of children? With your help, MoveOn will speak out and campaign against this moral outrage, support partner organizations that are working directly with the most impacted communities, elect progressives who will fight against it in Congress, and end Republican control of Congress this fall.
Yes, Jeff, I'm in! I'll chip in $5 a month.

(The best way to help ensure that MoveOn can fight against this and other horrific abuses during the Trump era is to click here now and become a committed monthly donor. Your ongoing support will help MoveOn fight for as long as it takes, and work to take back power in Congress, which will give us more tools to stop Trump's worst abuses. But if you can't chip in monthly, then please click here right now, because MoveOn urgently needs your help to end this moral outrage.)

I so much appreciate your partnership as citizens of integrity and grit, who are willing to help fight to end oppression and to build a better world!
All my best,
–Jeff
Jeff Merkley
U.S. Senator

Want to support MoveOn's work? The MoveOn community will work every moment, day by day and year by year, to resist Trump's agenda, contain the damage, defeat hate with love, and begin the process of swinging the nation's pendulum back toward sanity, decency, and the kind of future that we must never give up on. And to do it MoveOn needs your ongoing support, now more than ever. Will you stand with MoveOn?

Federal candidates or officeholders mentioned above are not asking for more than $5,000 per calendar year from individuals or other federally permissible sources, nor are they asking for any funds from corporations, labor unions, or any other federally prohibited sources.
PAID FOR BY MOVEON.ORG POLITICAL ACTION, http://pol.moveon.org/. Not authorized by any candidate or candidate's committee.
Posted by Angela Valenzuela at 1:12 PM