The Shocking Abuse of Children: An Eye-Witness Account, an ACLU Report, and What You Can Do

Here are few items related to the #HumanitarianCrisis taking place right now at the U.S.-Mexico border.

First, you must listen to this first-hand account (in Spanish) of an Indigenous woman who was jailed for four days as she tried crossing the border recently in Nogales, Arizona.  She offers an eye witness account of the horrific violence and abuse that is taking place there currently.


Children really are getting stuffed in cages—bird-like cages, this woman said.  I earlier posted one such image that screams of injustice on this blog.

Second, read this shocking report by the ACLU.  It has been a reign of terror for much too long already and this human tragedy is only growing.  The report examines 4,600 pages of records, documenting "shocking" amounts of child abuse (their words).  You know things are bad for these migrants when "Nicaragua, which is one of the poorest countries on earth, is receiving asylum seekers from Central America."

Third, also do read this 2014 piece titled, 14 facts that help explain America's child-migrant crisis.  I repeat, 2014.  We have had this problem for some time now and we need as a country to have a deeper understanding of it in order to address is properly.

Fourth, I ask you, my friends, to join with Armando F. Sanchez who is calling on all of us to call Washington unceasingly and let the children free.  Let's all chant,

Fifth, Let's reach out to Congress and to the White House.  If you don't know who represents you in Congress, go here to find out.

Lastly, and most importantly, since the issue is not adherence to a law, but rather current White House policy, here is what you can do for Father's Day to make a difference for these children and their families.

Let's all work together to hang up the communication lines at the White House and demand that Washington free the children to their parents and to give all of these families that are victims restitution for the disgraceful and unspeakable harm and trauma that our government has visited upon them.

I close with Jesus' words of how children are the greatest in God's Kingdom:


We are judged not only as individuals, but as nations, my friends. Let's bring this reign of terror to its knees. 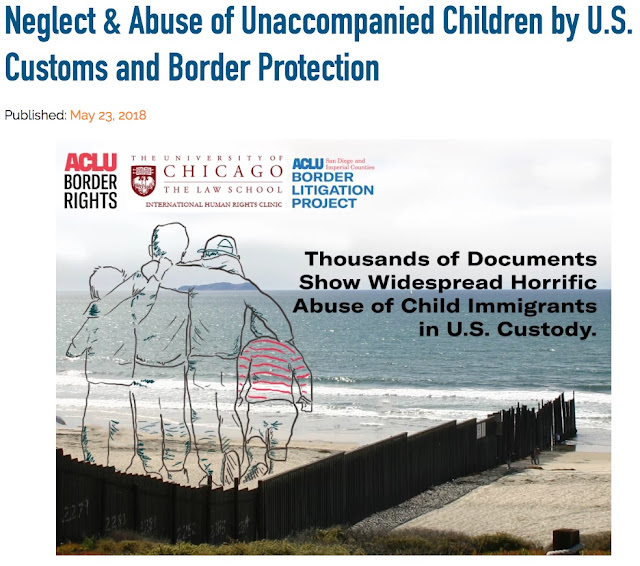 The Department of Homeland Security (DHS) Office for Civil Rights and Civil Liberties (“CRCL”) is the agency within DHS that is, according to its own website, responsible for “promoting respect for civil rights and civil liberties in policy creation and implementation,” and for “investigating and resolving civil rights and civil liberties complaints filed by the public.”
In response to our FOIA request, CRCL released approximately 4,600 pages of records, consisting of complaints submitted by legal service providers and immigrants’ rights advocates on behalf of migrant children detailing various forms of abuse. The CRCL records also consist of internal agency records documenting the limited investigations it undertook.
The International Human Rights Clinic at the University of Chicago School of Law has written a report highlighting the experiences of migrant children (often asylum-seekers) who suffered verbal, physical, or sexual abuse from CBP officials. The appendix contains all of the original records cited in the report.
REPORT: Neglect & Abuse of Unaccompanied Children by U.S. Customs and Border Protection
Appendix: CRCL documents discussed in Report
1-Pager Summary: English & Spanish
For the full set of CRCL documents, please visit http://bit.ly/cpbclcrdox
Posted by Angela Valenzuela at 12:15 AM