Here is a nice piece by Araceli Cruz on the battle for Mexican American Studies in the state of Texas.  I totally agree that the epicenter was Arizona in the Tucson Unified School District which regenerated this movement that tracks back easily to the Civil Rights era and earlier for all of our groups: Mexican Americans, Asian Americans, African Americans, and Native Americans.


The compromise name that was voted on and approved today by the Texas State Board of Education is "Ethnic Studies: Mexican American Studies." I think that what's important here is that our name, our field of study, and the original course title is in the name: Mexican American Studies. Otherwise, it would have been unacceptable. This is an historic victory for all of the people across the state who have been working on this for the last five years. This is the first time in US history that a state board of education approves a MAS course, and the first time in Texas history that an Ethnic Studies course of any kind is approved. Now the work continues to get this and other MAS and Ethnic Studies courses implemented across Texas schools, from Pre-K-12th grade. Pa'lante. #ApproveMAS #SomosMAS

Yes, and now on to more battles.  We have a lot of work in store to get all of these Ethnic Studies courses fully implemented across Texas public schools. 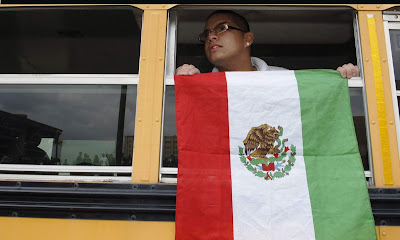 FOR MORE THAN A DECADE, A HIGH SCHOOL CLASS HAS STIRRED UP CONTROVERSYthat spread from the classroom to the courtroom.
There is a battle brewing over Mexican-American Studies (MAS), which has been fiercely fought in schools throughout the West and beyond.
It may seem counterintuitive that a history class about Mexican-American heritage would be so controversial. After all, the country is inhabited by 56.6 million Latinos — 63.4% of which are of Mexican descent. So it would seem logical that school officials would want students to learn about their history. Then there’s the fact that a massive portion of the U.S. was actually Mexico for many years, interweaving the American and Mexican (and not to mention Native American) experiences.
Yet, teaching MAS to high school students has been a long and contested battle.
The name change might not seem like a big deal, but it is.

TWO OF THE BIGGEST ISSUES CONCERNING MAS — aside from advocating for the courses itself— is what the curriculum will consist of, and — strangely enough — what to call it.

In Texas, after years of back-and-forth about this matter between advocates and school officials, the State Board of Education finally approved to launch curriculum under the name Mexican-American Studies, which would be implemented in 2019.
The Texas State Board of Education approved the MAS curriculum, which includes “lessons on Hernan Cortez's first encounter with the Aztecs in 1519, the Mexican Revolution of 1910, the Bracero program, and iconic labor leaders Cesar Chavez and Dolores Huerta,” among other topics.
Seems pretty straight forward, right?
Not for Beaumont board member David Bradley. In April, the Republican Bradley objected the name of the course and introduced a new one: “Ethnic Studies: An Overview of Americans of Mexican Descent.”

Tony Diaz, a college professor, was not happy about it. “An overview?” he tells GOOD, “For people not in this industry, the name change might not seem like a big deal, but it is.”
Diaz, who is also the lead editor of the “The Mexican American Studies Toolkit” — a textbook that some educators are already teaching, explained the relevance with this analogy: “Say they changed the name of Tex-Mex food to American food with ingredients from Texas and Mexico. People would be angry and think it’s idiotic.”

There was still so much I didn’t know.
Diaz also says that the courses that will be taught under the MAS program are pretty extensive and thorough, so calling it an “overview” is just false.
Bradley’s explanation for changing the name of the course, according to the San Antonio Express-News, is because he finds “hyphenated Americanism to be divisive."

Discovering personal histories
FOR ME, LEARNING ABOUT MY HERITAGE was crucial.

I am a Mexican-American Latina who grew up not far from Los Angeles, and, as a kid, I never really grasped the historical contribution of my community.
I knew on a certain level that our cultural influence made a significant impact in California — but aside from Cinco de Mayo, my heritage wasn’t nurtured in school even though the class demographic was predominantly Latino. Throughout my high school education, I was just taught the basics. In college, I took a “La Raza” course and was introduced to some notable Latino activists and creatives that shaped American culture, but there was still so much I didn’t know.
Years later, in late 2015, in the midst of the presidential election while researching deportations, I learned that my grandmother and her family were part of the Mexican Repatriation, an unofficial movement by local county agencies and private industries in the 1930s who made U.S. born people of Mexican descent go “back home” to Mexico. But Mexico wasn’t “home” to everyone. Nearly 60% of the nearly one million people of Mexican descent affected were born in the U.S.
Until that point, I had never heard of the Mexican Repatriation — let alone that my grandmother and her family were illegally deported during the Great Depression. I mention this only to express the importance of teaching Mexican-American history to a Mexican-American person and non-Latinos. The Mexican Repatriation is a huge part of U.S. history and so much could have been cleared up for me if I had been educated about it while in school.
In fact, I would have been able to discuss it with my grandmother before she died.
While I never learned about the Mexican Repatriation, a group of ambitious fifth graders from Bell Gardens, California, fought to learn about their heritage. In 2015, they petitioned to have the story of the Mexican Repatriation included in their curriculum, and won. California Governor Jerry Brown signed Assembly Bill No. 146, which stated kids in grades 1-12 would be educated about the Mexican Repatriation.

The victory of these students became a victory for history.
The issue was a political boon to the candidates. Beginning the ban
THE EPICENTER OF THE MAS DISPUTE BEGAN IN ARIZONA, which Diaz calls “ground zero.”

Last year, Arizona U.S. District Judge A. Wallace Tashima ruled that racism was behind the ban of the MAS curriculum by school officials.

The MAS program first began in Tucson in 1998. The Associated Press reported that students who participated in the program “outperformed their peers in grades and standardized tests.”

But it was disbanded by school officials in 2012.
Judge Tashima said that Tom Horne, former superintendent of public instruction in Arizona — and his successor, John Huppenthal — expressed their racist tactics and motives behind ending the program.
“Additional evidence shows that defendants were pursuing these discriminatory ends in order to make political gains. Horne and Huppenthal repeatedly pointed to their efforts against the MAS program in their respective 2011 political campaigns, including in speeches and radio advertisements. The issue was a political boon to the candidates,” Tashima wrote in the ruling.

According to the Huffington Post, Huppenthal commented under two pseudonyms from 2010 to 2013 “likened Mexican-American studies teachers to the Ku Klux Klan and accused them of ‘having an orgasm over the claim that their book was banned.’”

Even after the ruling Horne stood by his words and said that “Tashima’s decision promotes a program that ‘divides students by race and promotes ethnic chauvinism.’”

He seems to get a thrill out of saying things that draw blood — that insult and demean.

WHILE THESE RACE-BASED TACTICS ARE DISTURBING, the most troubling to Diaz is the last minute name change of the course. He believes Bradley’s decision to change the name of course is completely strategic.
He claims that Bradley is discriminating against MAS teachings and asks “does this mean they’re going to change the name of ‘African-American Studies or Asian-American Studies?’”
Bradley is known for making disparaging comments and not just about Mexican-Americans, but also Muslims and President Barack Obama.

“We suppose some might argue that Bradley is racist,” Dan Quinn writes. “We certainly don’t know what’s in his heart and will thus make no such claim. But he has regularly demonstrated how insensitive and unconcerned he is about the experiences and challenges of those who are from different ethnic, racial, and religious backgrounds. And he seems to get a thrill out of saying things that draw blood — that insult and demean.”

THE ISSUE OF NAME CHANGE is far from over.

Posted by Angela Valenzuela at 6:38 PM